The disintegration of the largest ice shelf ever known to collapse started in February 2008 during the Antarctic summer. Signs of the breakup continued during the deep polar winter, something else that has never been seen before. The European Space Agency has now announced that the breakup amounts to 14,000 square kilometers, or over 5,000 square miles – an area large than the state of Connecticut. This is the latest and largest of about a dozen such collapses along the Antarctic Peninsula over the last dozen years. 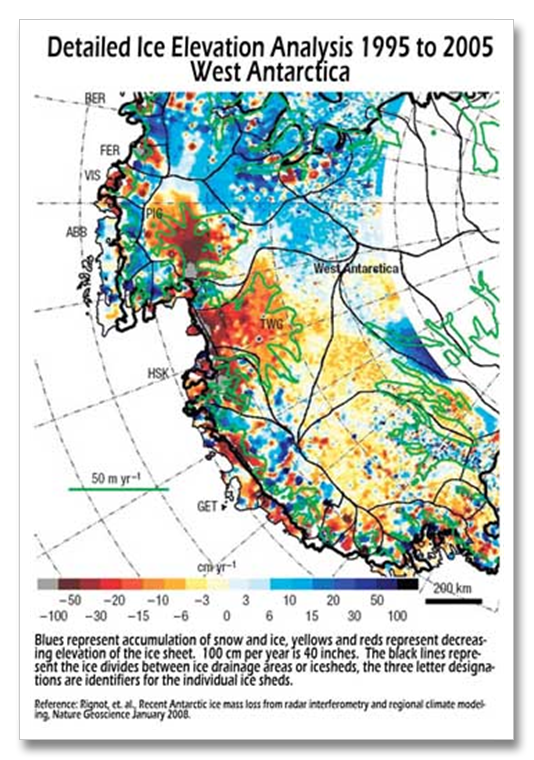 As time goes on and the Antarctic continues to warm, the collapses are getting bigger, and progressing further south towards the main body of Antarctica. Now the West Antarctic Ice Sheet (WAIS) is awakening. The WAIS is the area between the Antarctic Peninsula and the Ross ice Shelf. The ice rivers of the WAIS have sped up by nearly half again to almost double.  Its buttressing ice sheets are rapidly thinning from beneath by warming ocean waters. This mass of ice is the only remaining relic of its kind from the last ice age. It is called a marine ice sheet and it is inherently unstable. 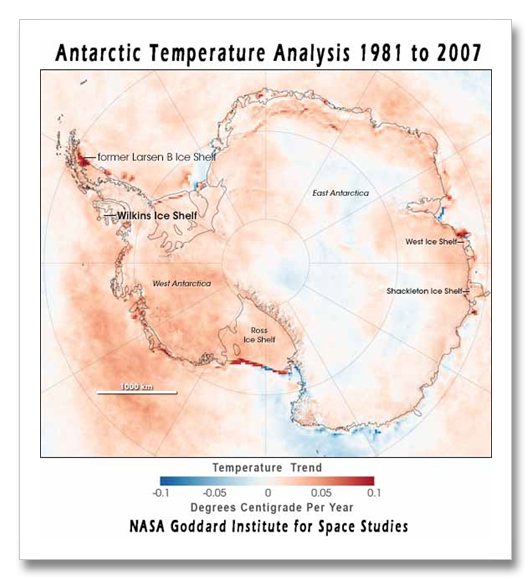 Its foot is grounded on the ocean floor but its main mass of ice towers above sea level. There is as much ice in the WAIS, above sea level, as there is in Greenland. it is unknown how fast it might disintegrate, but scientists have given this disintegration its own name. It is called dynamical ice sheet disintegration. The IPCC specifically excludes sea level rise from this type of ice sheet discharge, and did so five separate times in their 2007 Climate Impacts Assessment.

In the prehistoric past, it is theorized that marine ice sheets like the WAIS have collapsed  and resulted in sea level rises of 15 feet or more in 100 years or less. The minimum time frame on the studies was 100 years, so the sea level rise could have been much faster.  Evidence of the prehistoric marine ice sheet collapses is found spread across the entire North Atlantic seafloor in the form of layers of sand and gravel carried their by massive iceberg armadas resulting from the dynamical disintegrations. The layers range from an inch or two in the eastern North Atlantic to two feet in the western North Atlantic.

In 2003, a Rhode Island piece of ice called the Larson B Ice shelf, on the other side of Antarctic, completely disintegrated in 28 days.