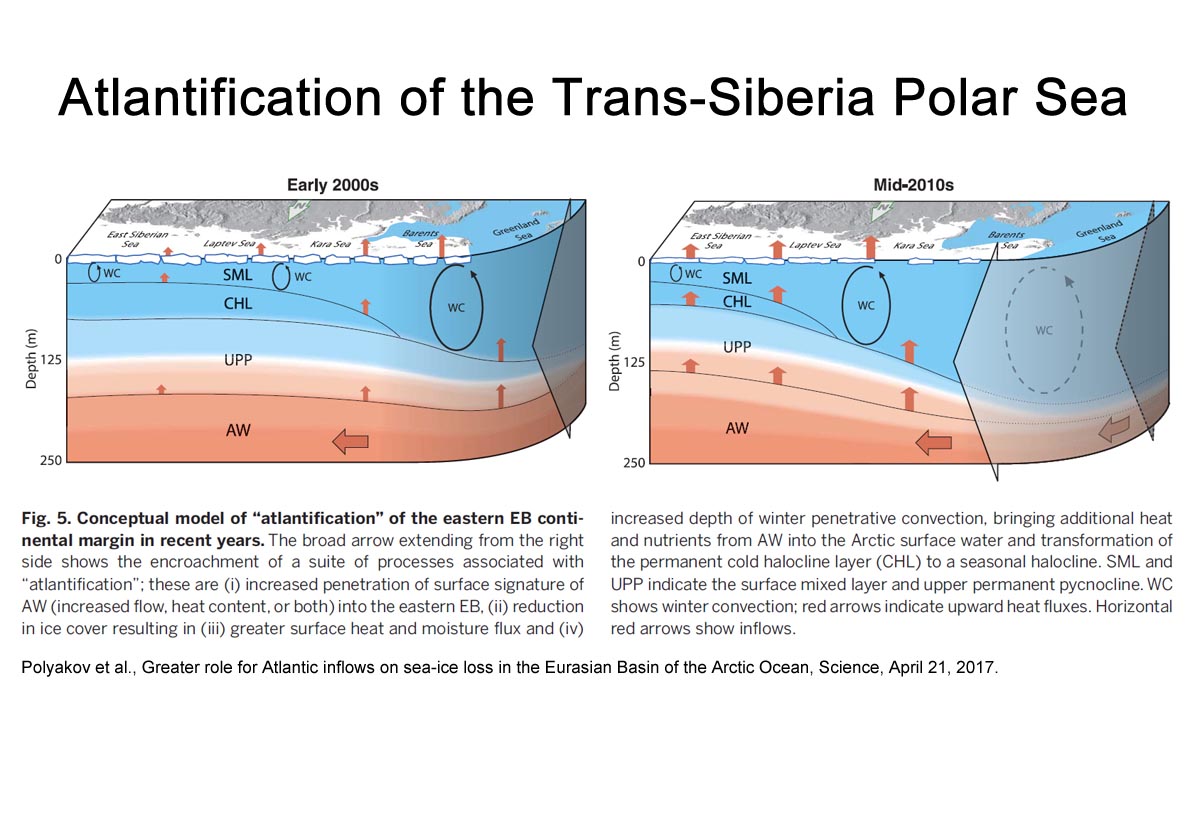 Warm Atlantic water is invading the Arctic Ocean in a novel way. It is “Atlantifying” the Polar Sea. The results are that ice loss in the Arctic to the north of Siberia is likely enhanced. This “invasion” has always been a known thing in the Western Arctic, but now it has shifted 1,000 miles east and is further threatening subsea permafrost laid down during the last 100,000 year ice age and possibly before.

This warm Atlantic water is pushing its way beneath the cold surface waters of the Arctic and doing two things: diminishing sea ice of course, and mixing polar waters, a likely more important effect.

Polar oceans are not like other oceans. They have a layer of cold, less salty water on the surface that overlays deeper warmer, more salty water. This layering is formed because when sea ice freezes, salt is expelled as super concentrated brine. This brine is heavier than the water around it and it falls into deeper water before dissolving into the surrounding upper ocean leaving the upper levels less salty.

The result is that the colder less salty surface waters form a halocline, very similar to the thermocline we experience in our lakes during a summer swim. The upper waters are different enough from the lower waters that they don’t mix. 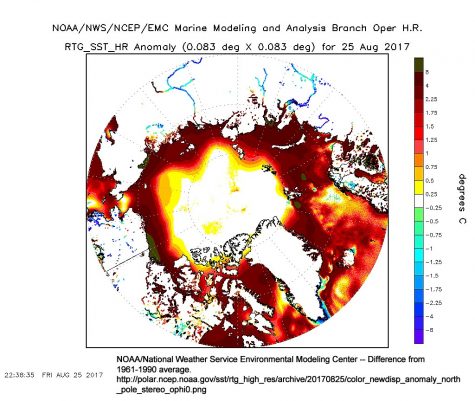 In our summer swims, when we take a little dive below the surface, we rapidly pass through the upper warm layer –through the thermocline — into the cold deep water of the lake. A halocline (halo is ancient Greek for salt) separates the less salty water above, from more salty water below.

When a water body is layered or stratified like this, the two layers don’t mix. In the Arctic, this layering promotes even colder water at the surface because it does not mix with the lower, warmer waters. The colder surface water of course promote greater ice formation, which expels more salt as the ice forms and increases the freshness of the surface waters in a feedback loop that strengthens the halocline and acts to further decrease any surface mixing.

The incursion of warm Atlantic water into the Arctic is eroding this halocline, warming from below, and allowing mixing to greater depths. So there is a double feedback. The surface is warming from below and the eroded halocine allows greater mixing of warmer deep waters with the surface.

This research was performed with tethered and free-ranging sounding buoys that sink and rise, sampling along the way. The effect has been noted since 2002 with increasing strength in the twenty-teens.

The authors of this research say: “This encroaching “atlantification” of the Eurasian Basin represents an essential step toward a new Arctic climate state, with a substantially greater role for Atlantic inflows.” As for the future, the team says: “Although specific physical mechanisms involved in sea-ice decline and upper ocean ventilation remain under debate, it is likely that higher-than-normal Atlantic water temperatures and salinities in the Nordic Seas, upstream of the Arctic Ocean gateways, will promote the further eastward ‘atlantification’ of the polar basins. This follows with scenarios for regional ocean state responses to climate changes … and has substantial effects for future changes in the Arctic Ocean and its sea-ice cover.”