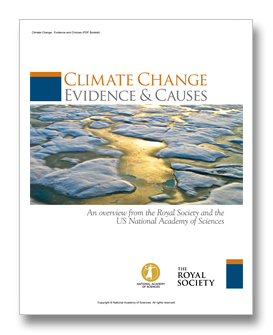 Have you ever been incensed by a Facebook post citing some authoritative sounding person proclaiming yet again that climate science is all smoke and mirrors? Or have you ever been flummoxed in an email discussion about climate change where up is down, black is white and all of science is stood on its head? Where every statement you made about climate change was met with an absurd talking point where there was simply no daylight between the talking point and science insanity?

You need a magic answer. It is published in this nifty little booklet produced by the U.S. National Academy of Science’s and the United Kingdom’s counterpart—The Royal Society. These two organizations come with what could be the highest credibility of any organizations in the known universe. If there is a magic answer to the climate pollution conundrum, it’s in here.

I have long argued that this kind of discussion is only good for ulcers and should be dropped like a red-hot skillet handle at the earliest convenience—that we don’t need their votes, we need to focus our scant outreach resources on the vast majority of people who believe climate change is real so that they can help try and convince our elected leaders to finally do something.

A recent media outburst of climate skeptic sensationalism caused by environmentally discredited Patrick Moore has brought about a need for some basic sanity in the discussion once again. The media has taken what was a founding member of radical environme 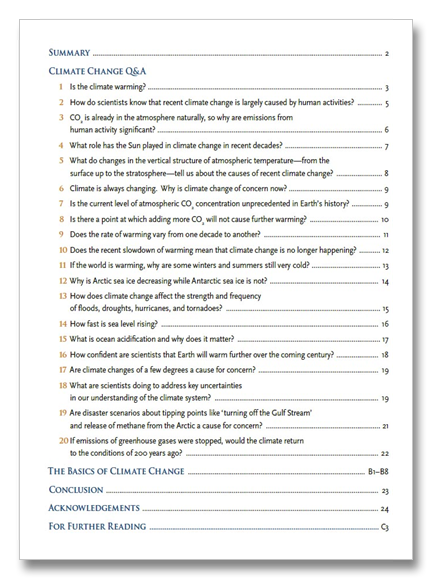 ntal justice action 40 years ago and elevated his pseudo science statements to that of fact in that all too unfair journalism phenomena “the fairness bias.” 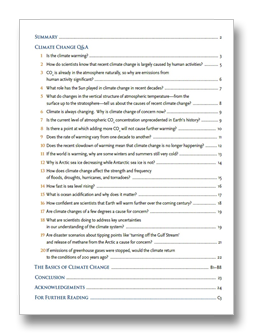 The $7 billion Climate Change Counter-Movement has devastated normal science outreach in this country and around the world too. It is up to us all now to help guide our leaders along the appropriate path. The challenge is; how in the world do we overcome the fervor with which most Conservatives carry themselves in regard to climate change these days?

The Royal Society and the US National Academy of Sciences, with their similar missions
to promote the use of science to benefit society and to inform critical policy debates, offer
this new publication as a key reference document for decision makers, policy makers,
educators, and other individuals seeking authoritative answers about the current state
of climate-change science. The publication makes clear what is well established, where
consensus is growing, and where there is still uncertainty. It is written and reviewed by a
UK-US team of leading climate scientists. It echoes and builds upon the long history of
climate-related work from both national science academies, as well as the newest climate change
assessment from the United Nations’ Intergovernmental Panel on Climate Change.

The National Academies and the Royal Society are the United State’s and the United Kingdom’s separate national science authorities. Basically, there is no higher authority. So the next time you accidentally stumble into a climate change fight, bow out gracefully at the earliest convenience and forward a link to this publication with a sincere request asking what your adversary thinks of this publication.

Or if you just like to argue, this publication has all the answers to the latest talking points, lined out specifically as per the talking point.