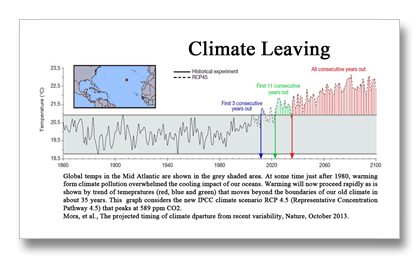 It’s called Climate Departure and it is coming soon to a planet near you. On the path that we are on where we are actively hampering the development of alternative energy sources and do virtually nothing to reduce climate pollution, the date that we will leave our old climate behind globally is 2047. Many parts of the world will be different and the tropics surprisingly will be some of the first areas of the world to leave our old climate behind.

If we do finally begin to limit climate pollution emissions, the authors tell us we will still completely leave our old climate behind by 2069, but this does not consider the “best case scenario.”

Altogether though, this message is quite a change. We knew that much of the lower latitude areas of the world would be impacted the most through previous work showing that poorer nations had the most to lose. This study confirms that. The reason being that climate in the tropics is fairly narrow with smaller swings in the extremes than higher latitudes. This means a smaller global temperature rise will push those tropical environments beyond their evolution faster and create damages sooner.

Exactly what Climate Departure means is: “The year when the average temperature in any given place is warmer than the warmest temperature experienced by that place in the past 150 years.” This time frame of 2047 is the global average. To living things, the meaning is somewhat muddled.

Some things can adapt, some can’t. Some can migrate, some can’t. As the temperature rises, extinctions will occur locally, then globally dependent on the species and it’s ability to migrate to a cooler environment. Many plants will suffer by a greater degree because of their slow rate of migration. Warming temperatures will simply overwhelm their ability to flee. Largely however, this work is only another metric. It does not give us specific information about when different extinction or migration events will create impacts on you and me. There are plenty of works out there that are looking at this in greater detail every day.

What it does do however is set up new boundaries that are more meaningful. The 2 degrees C boundary between a “safe” climate and a “dangerous” climate for example, happens during a similar time-frame. It’s the understanding that the normal temperature will be hotter than the hottest temperature that modern civilization has encountered that is meaningful.

The authors’ have some fairly stern language telling us we are locked in to this path of significant destruction, but this is all based on Kyoto Era thought. The 2047 date represents an emissions scenario that is consistent with one of the middle of the road scenarios from the old IPCC work. In other words—Kyoto Era climate pollution mitigation.

Allowing atmospheric CO2 to increase to 538 ppm by 2100 is the best scenario looked at with this work. the authors’ reasoning was that zero atmospheric carbon growth was not evaluated sufficiently in the new scenarios in the models. As the new IPCC report says however, we can get ourselves out of this mess by sustained emissions reductions of greater than 100% annually.  Mining carbon from the sky is becoming imperative. This is the best case scenario and reporting elsewhere that it is infeasible is simply wrong.

This work was prepared by a team from  the University of Hawaii and the
Organization for Subtropical Island Studies, University of the Ryukyus,  Japan. The introductory paragraph to the paper in Nature this month is presented below:

Climate is a primary driver of biological processes, operating from
individuals to ecosystems, and affects several aspects of human life.
Therefore, climates without modern precedents could cause large and
potentially serious impacts on ecological and social systems. For
instance, species whose persistence is shaped by the climate can
respond by shifting their geographical ranges, remaining in place
and adapting, or becoming extinct. Shifts in species distributions
and abundances can increase the risk of extinction, alter community
structure and disrupt ecological interactions and the functioning of
ecosystems. Changing climates could also affect the following: human
welfare, through changes in the supply of food and water; human
health, through wider spread of infectious vector-borne diseases,
through heat stress and through metal illness; the economy, through
changes in goods and services; and national security as a result of
population shifts, heightened competition for natural resources, violent
conflict and geopolitical instability. Although most ecological and
social systems have the ability to adapt to a changing climate, the
magnitude of disruption in both ecosystems and societies will be
strongly determined by the time frames in which the climate will reach
unprecedented states. Although several studies have documented the
areas on Earth where unprecedented climates are likely to occur in
response to ongoing greenhouse gas emissions, our understanding
of climate change still lacks a precise indication of the time at which the
climate of a given location will shift wholly outside the range of historical
precedents.