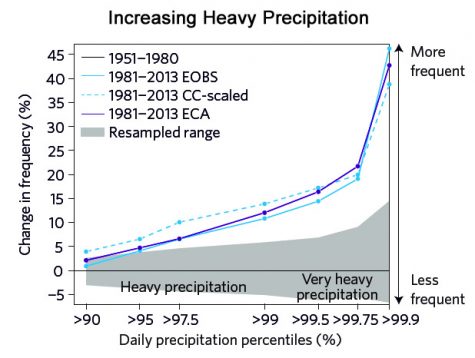 As of 2013, the most extreme storms had increased on average nearly 50 percent across Europe. The 99 percentile daily precipitation event is the 1 percent probability storm or the 100-year storm. Similarly, the 99.9 percent storm is the 0.1 percent probability event or the 1000-year storm. Purple and cyan lines are European data sets. the gray flat line is our old climate 1951 to 1980. The gray shading is natural variability. From Fisher and Knutti 2016.

In 1834 and 1850, two European scientists (Clausius and Clapeyron) developed scientific principles that told us that warmer air holds more water. In the 1960s and 70s the computer models that first simulated our climate showed that more atmospheric CO2 would increase Earth’s temperature, relative humidity, and total precipitation because of the Clausius–Clapeyron principles. In the late 1980s came work suggesting increasing rainfall rates due to warming.

In the Early 1990s the first observational confirmation of increasing rainfall extremes were published concerning the US and Japan. By today’s standards the results were not very compelling as only 14 stations were evaluated in the US, and the 2nd Intergovernmental Panel on Climate Change report in 1995 continued to state that there had been no increase in extreme precipitation.

Even today, the natural variability is high enough and the increased frequency of extreme event is still low enough that radical skeptics continue to question the validity of the statistics even though technical validity is not in question. The reason the radical skeptics deny is fairly plain and  is actually quite logical unless one happens to be a an expert in statistics.

The theory of natural variability says that a 100-year storm has a one percent chance of happening in any given year. Interpreted more simply, a 100-year storm happens “on average” once every 100 years. This “average” explanation illustrates how we can have two or three 100-year storms in some places over the last five or six year, or in the case of the Guadalupe River Basin in Central Texas–five in the last 20 years. It’s an average, so they say.

The models that were predicting increasing extreme precipitation said that the 100-year storms would get more frequent, some going as far as saying by 2100, the 100-year storm would be happening every ten years or even every few years.

Very rarely in science is a future trend predicted and then verified. This is not because these future things are not valid, it’s simply because they almost always have something to do with climate, and up until now, our climate has not yet changed.

But now it’s changed. It started doing so rapidly in the late 1990s/turn of the 21st century. Studies from across the world are reporting regionally that precipitation rates are increasing. The signal is strongest over the US and Europe and less so in the tropics. This may be due to greater observational capacity in the most developed nations, or to the verified planetary warming relationship (another of the early model predictions that rings true), where the tropics warm less than mid-latitudes (and mid-latitudes warm less than the poles).

The other thing that observations are confirming from earlier model predictions is that dry periods are getting drier. Many things cause this end of the phenomena too, but mostly it’s the trigger for rainfall.

A warmer planet makes all extremes more extreme. Because dry air becomes drier, the opportunity for rainfall decreases because there must be a certain amount of moisture in the air to make it rain. As the low volume rainfall events decrease, less soil moisture is available to evaporate and provide more atmospheric moisture to create precipitation. This is the drought/moisture feedback and it can actually create drought with normal or even above normal amounts of rainfall.

This phenomena can be thought of as “apparent drought.” It does not follow that drought can occur with normal or increased rainfall, but it does. The longer dry periods allow for greater evaporation. When it does rain, more moisture is absorbed by the drier soil and less runs off into rivers and lakes. This “apparent drought” short-circuits the water cycle creating something new in science.

TEMPERATURE: No discussion of climate predictions coming true is valid without touching on the temperature hiatus. The single best illustration of why temperature did not keep up with the models from 1998 to 2015 is told by this report — IPCC: More Than All of Observed Warming Has Been Caused by Humanity’s Emissions Increased global cooling aerosol production from vastly increased coal burning in China, India and Asian countries during the post 1998 Super El Nino period masked, or suppressed warming. The other big reason is that 1998 Super El Nino itself. When the radical skeptics chose the biggest Super El Nino ever recorded to begin their decree that warming had stopped, they made the biggest rookie statistical mistake ever made. Do not begin a trend observation with a massive outlier.

This trick that was played on the global public by the Climate Change Counter Movement  was believable because the media’s ability to ferret out inappropriate interpretations has nearly completely disappeared. This relationship is called the Fairness Bias and in-itself, is probably the biggest single reason that mankind does not trust its climate scientists like we trust all other scientists and why we have yet to implement meaningful climate pollution regulations. The media cannot, or will not give credit where credit is due and consequently, they report the vast monitory opinion as if it were equal to the vast majority opinion. This “equal reporting” gives an impression of “equal validity,” which does not exist. Backing up the scientists today in this “warming hiatus” discussion is the thermometer record. The massive jump in global temperature has finally occured, just as climate scientists predicted–another prediction come true.

This massive jump may have been caused by another Super El Nino, but the previous Super El Nino was one of the primary things that allowed the media to repeat the false assertions that warming had ceased.

And a word of caution: Do not expect much recovery of the temperature after this most recent Super El Nino. There wasn’t really a recovery after the 1998 event and the things that prohibited a recovery in 1998 are even more pronounced today after another 16 years of warming where feedbacks increase nonlinearly.