Extremely Increasing Extremes Already and the Accuracy of Climate Models

In the long-term,  extreme weather will certainly become more extreme, with hotter heat waves and less intense cold waves, more intense  precipitation events and longer drought. But in the short-term (40 years or less) things may reverse regionally or they may increase even more dramatically than the long-term rate suggests.

This new modeling work shows that by mid century, some regions will see up to twice the average number of heat and precipitation extremes as global modeling suggest. Some areas will see little change and a few will even see more cool extremes.

Extremes are increasing regionally because of climate change and the examples from the literature are now becoming common.

But there is a perception about modeling, largely in the public realm, that it is inaccurate because the model results are always given with a range of possibilities. This range is interpreted as the models being wrong by this “plus or minus” range. This is not at all what this means and this paper helps shed light on the reasons why those suggested ranges are not errors.

What this new modelling is telling us is that the range of natural variability increases with warming. The outer edges of the range are not wrong answers, they are actually how our atmosphere responds given the chaotic nature of weather. The spaghetti plots  below show individual models runs that are just all over the place, even in the early days with only a slight amount of warming 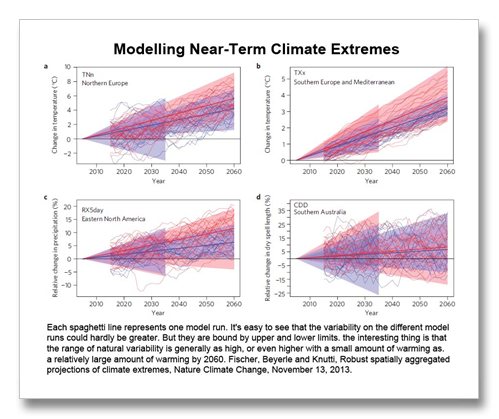 Another way to look at this information is to compare the wide variation in the model runs in the image from this research “Modelling Near-term climate Extremes” to what happens to the local weather forecast after five or six days. the local weather forecast is often wrong, but with the much longer time frames of climate, any one of the different model runs could be the actual climate that we experience.

The authors conclude that they are mostly caused by natural, chaotic and thus unpredictable fluctuations in the climate system. There is certainly potential for improving climate models, Fischer says. “However, even if we had a perfect model for the medium-term, there would still be uncertainties.”