How much CO2 reduction, how much does it cost, and what’s it worth? A Detailed Primer 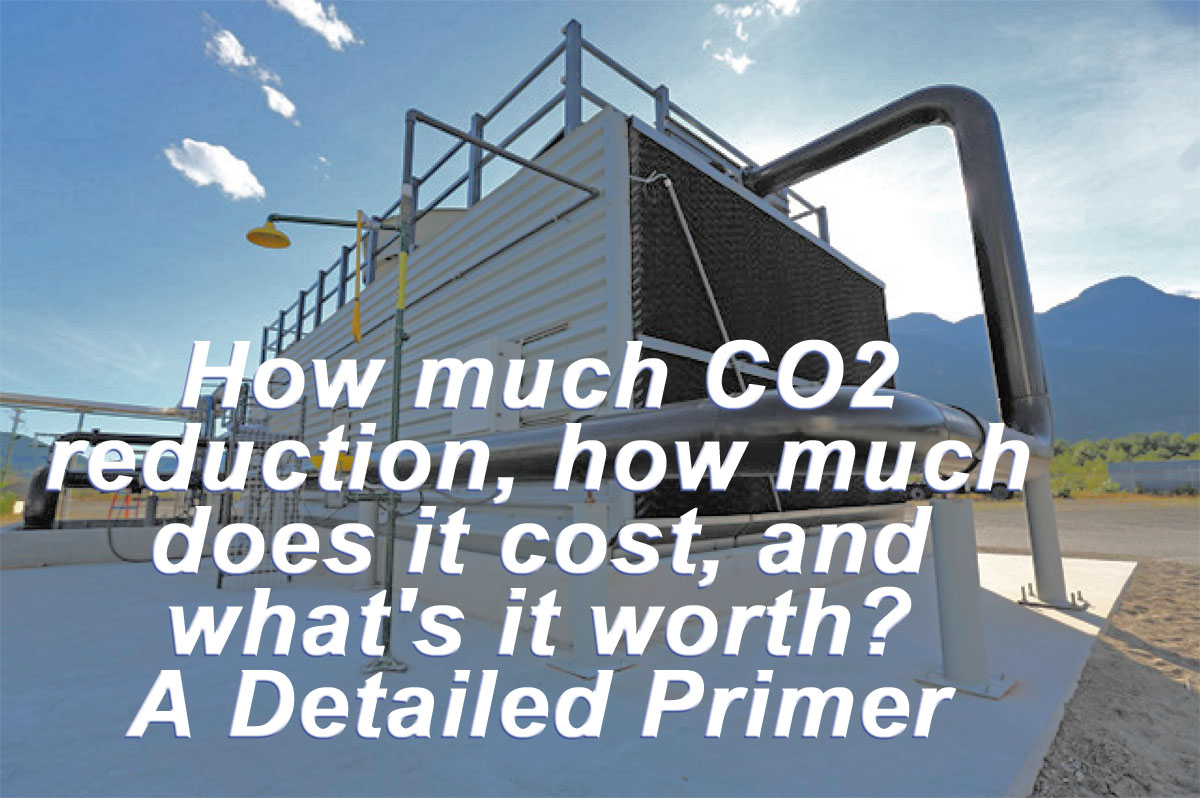 How much CO2 reduction, how much does it cost, and what’s it worth?
A Detailed Primer

We have been moving towards the answers to these questions forever it seems, so here goes:

Immediately below is my summary. Further down are thoughts on how I arrived at these numbers. These costs assume that we can do what it takes to return CO2 to somewhere near 300 ppm far faster than current climate culture suggest for climate reform (10 to 20 years.) It also assumes that 300×2050 (300 ppm CO2 by 2050) restabilizes abrupt changes that have already begun and that geoengineering strategies are not deployed (like refreezing the Arctic or solar radiation management.)  At the very bottom is a rationalization of how we can afford costs–if benefits do not outweigh costs creating a net profit scenario, and also very important–how we deal with 36 percent of current warming caused by non CO2 greenhouse gases:

How much CO2 reduction, how much does it cost, and what’s it worth?

These numbers are simplified and do not consider things like off gassing of CO2 from the oceans when atmospheric CO2 is reduced.

This is a tough one with very few capturing the real costs of climate change. My analogy is stark, but because most things with climate change have turned out to be substantially more stark than previously projected, my engineering brain says go with stark. I use my engineering brain in this thought exercise because I have been trained for over 30 years to base outcomes on risk. Because of the outsized risk of abrupt changes radically altering life as we know it, I choose abrupt changes because life as we know it is by far the single most important thing that ever was.

Note on Time Frames and Rate of CO2 Removal:

Time frames and the rate of negative emissions matter a lot. If we were to remove 776 Gt tomorrow, what comes back out of the oceans and etc. over the next 20 or 50 years would easily be removed through the infrastructure we put in place to remove 776 Gt. A lot more removal (negative emissions) is required with lower emissions reductions and a lower annual rate or removal. Hansen’s Young People’s Burden 2017 (my article on the paper here) illustrates. Hansen’s Target is 350 ppm CO2 by 2100. There is no modeling yet for 300 ppm CO2 by 2050, but Hansen illustrates the concept of delay and amount of negative emissions very well. His numbers do include offgasing with the best numbers that we know of today.

How Can We Afford All This?

We spend $3.5 trillion in the U.S. every year on health care. We spend a half trillion every year across the planet on advertising. Sure we can do this. All we need to do is become motivated.

What About Non CO2 Greenhouse Gases?

Thirty-six percent of warming we are experiencing today is from non CO2 greenhouse gases. There are very few identified mitigations for non CO2 greenhouse gases save one. Photocatalytic Solar Energy Generating Chimney’s can deal with non CO2 GHGs — most all of them. The facility in the link below is in Xi’an China, population 13 million. It uses a titanium catalyst and generates 200 Mw electricity too, while deactivating non CO2 greenhouse gases. Some of them, like methane, it converts to CO2, which has only a few percent of the warming potential of CO2 in the 20-year time frame which is vitally important right now.

This link needs to be translated — see instructions below:

Right click on the page and click on “translate…” The photocatalyst automatically promotes degradation of non greenhouse gas pollutants as well as other air pollutants. No disposal required. The chimney operates for free based on solar absorption in the day and solar absorption stored heat at night.

Here’s one of only a few papers describing this already installed technology —  de Richter 2017.