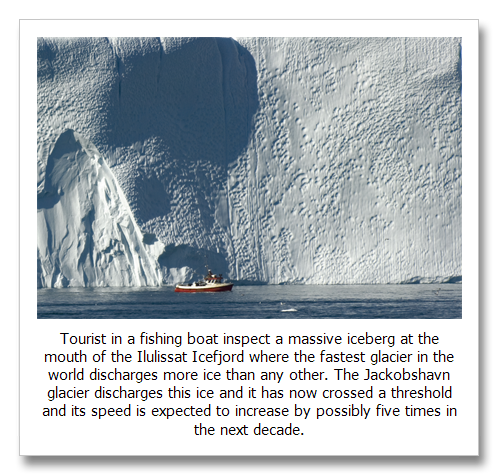 The North Atlantic is warming and  Greenland’s ice loss has quadrupled in the last 20 years. Warm water is getting under the floating edges of outlet glaciers and causing thinning which in-turn causes the glaciers to speed up. New research has identified another and  possibly new dimension to the increase of outlet glacier flow that is also directly related to warming.

The Ilulissat Icefjord, where the Jakobshavn discharges, is 3 to 6 miles wide, 30 miles long and incredibly choked with ice. The Jakobshavn drains 7 to 10 percent of the entire Greenland ice sheet and it alone has contributed 1 mm per year to sea level rise from 2000 to 2011. Much of this contribution has happened in recent years. It’s speed has increased 50 percent over 2011 and 300 percent over the late 1990s to 10.5 miles per year or over 150 feet per day.

Some of the latest research, published in The Cryosphere in February 2014 shows the record speed in summer of 2013 was 30 to 50 percent greater than the latest record in 2012. One of the reasons is  that the glacier has retreated to what the scientists call an over-deepened basin, or an area where the glacier has scraped the bottom much deeper than elsewhere. This basin is about 4,600 feet deep. The glacier floating on its surface is up to 3,000 feet deep. 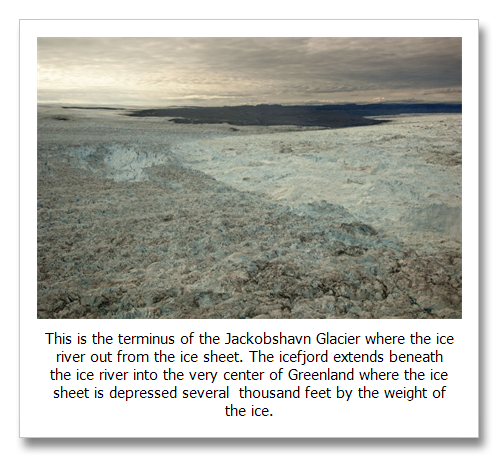 The record speed of this glacier was last set in the summer of 2013 at almost 1,800 meters per year or peaking at 160 feet per day. Because the glacier has reached this critical area of its flow path, an increase in average annual speed of up to 10 times its 20th century speed could occur in the next few decades.

This is ten billion cubic feet of ice per day or over 300 million tons of ice—per day!

What is happening now looks like a new phase in discharge for the Jakobshavn. It’s retreat is supposed be five times greater  in the next twenty years than the last. More importantly, the glacier has just retreated beyond the edge of land. Now it can get contributing ice from both sides as well as upstream. It’s not clear what the 11,000 foot tall mountain of ice that is the ice sheet will do. As the terminus retreats inland, flow from the sides will begin to increase.

The glacier is projected to retreat over 30 miles in the next ten to twenty years.

When massive calving occurs at the glacier terminus, 36 miles upstream from Ilulissat, they can create seismic events that continue for 90 minutes that register up to 5.2 in the Richtor scale.

Evidence reported in the Journal of Glaciology in 2011 from the Center for remote Sensing of Ice Sheets (CRESIS) at the University of Kansas tells us that the recent increase in speed of the Jackobshavn has not been controlled by the loss of the its floating ice tongue as has been long-accepted, but it is a function of melt water in lateral crevasses along the margins of the main ice stream. The melt water acts as a new force impacting glacier speed directly related to the warming temperature in Greenland. The authors caution that this new view of these forces controlling the Jakobshavn should not be applied to an understanding of why other glaciers are speeding up in Greenland 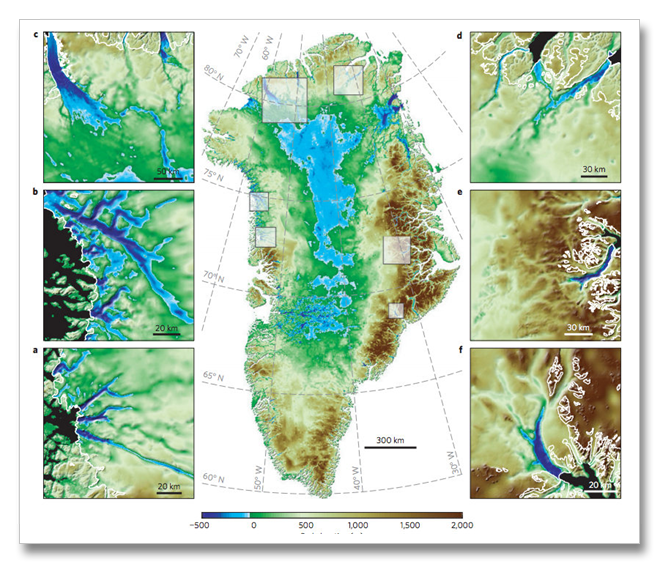 Researchers at the University of California and California Institute of Technolgoy have discovered that land beneath Greenland is not at all what we had previously believed. The center of Greenland is still depressed below sea level like we have known before but it’s the edges where outlet glaciers flow that concerns these findings. More powerful radar has identified submarine bed channels beneath the ice that are ten times more widespread than previous work shows, and that extend 50 percent farther inland than previous work in 2013 and 300 percent farther than 2001 work, up to 90 miles inland and ten miles wide. Sixty of the glaciers overlying these submarine valleys drain 88 percent of the Ice sheet and are more than 1,000 feet deeper than their glaciers meaning: “meaning they are deep enough to interact with subsurface warm Atlantic waters and undergo massive rates of [underice] melting .” This research concludes: ” These results will have a profound and transforming impact… reveal[ing] a more pervasive influence of ocean thermal forcing on these glaciers, which is more consistent with the past two decades of satellite observations.”

“Mass loss from the Greenland ice sheet quadrupled over the past two decades, contributing a quarter of the observed global sea-level rise. Increased submarine melting is thought to have triggered the retreat of Greenland’s outlet glaciers, which is partly responsible for the ice loss. However, the chain of events and physical processes remain elusive. Recent evidence suggests that an anomalous inflow of Atlantic origin subtropical waters driven by atmospheric changes, multidecadal natural ocean variability and a long-term increase in the North Atlantic’s upper ocean heat content since the 1950s all contributed to a warming of the subpolar North Atlantic. This led, in conjunction with increased runoff, to enhanced submarine glacier melting. Future climate projections raise the potential for continued increases in warming and ice-mass loss, with implications for sea level and climate.”

This is what is called a “tunnel valley” imaged from the Bamber dataset. The 200 m contour marks the edge of the ice sheet. From membrane.com: http://membrane.com/sidd/greenland-2013/walkback.html 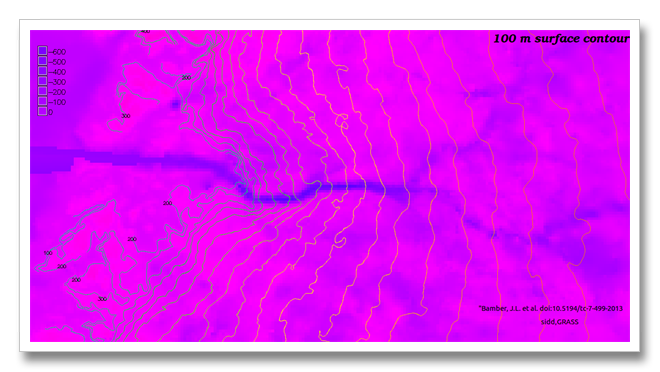 The most recent radar soundings show the sill. the dashed red line represents the edge of the ice sheet and the current Jakobshavn terminus.
Hughes et al., Quantifying the Jakobshavn Effect, The Cryosphere, April 25, 2014.
http://www.the-cryosphere-discuss.net/8/2043/2014/tcd-8-2043-2014.pdf 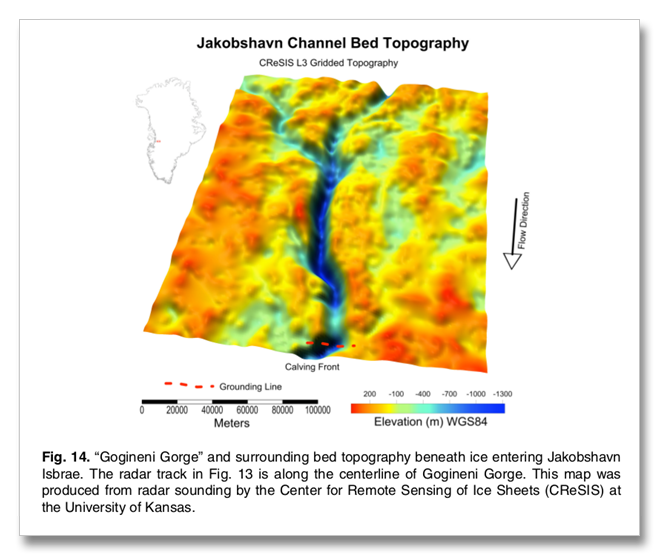