More on the Shutdown of the Gulf Stream 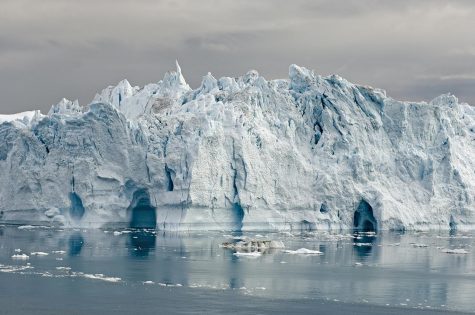 Icebergs fresh from the Greenland Ice Sheet at the mouth of the UIllusiat Icefjord. The Jakobshavn Glacier calved these bergs. It is the fastest moving glacier in the world at 150 feet per day and was responsible for a significant part of the freshwater cap that created so many abrupt changes to the Gulf Stream and our climate in the recent prehistoric past. Average annual ice discharge in Greenland 2000 to 2009 was five times greater than the previous 50 years.

Dansgaard Oeschger climate variability, more easily remembered as abrupt climate change, has been known from across the world through numerous lines of investigation since the early 1990s. This research greatly increases the robustness of the theory that a freshwater cap in the far North Atlantic from melting ice plays a significant role in abrupt change.

About 23 times in the last 100,000 years Earth has experienced abrupt changes that originated with a shutdown/startup of the Gulf Stream due to iceberg discharge and melt in North America and Greenland. This evidence is robust in bubbles of air in ancient ice from two mile deep Greenland ice cores. Changes of 9 to 15 degrees F across the globe and 25 to 35 degrees in Greenland happened in a century, or decades-long periods, or as little as several years. (1)

The theory is that freshwater melt from ice floats on salty sea water and creates a blockage in the warm northward flowing waters of the Gulf Stream. When the Gulf Stream shuts down, winter cold freezes the north Atlantic allowing cold air to penetrate much farther south, which has a reverberating cooling effect around the globe.

Sediment cores across the North Atlantic show layers that are full of sand and gravel that are far too heavy to have floated there from land.  These layers are called ice rafted debris and have been delivered by iceberg armadas from purging of the North American and Greenland Ice Sheets and coincide with many of the abrupt changes found in Greenland ice cores.

This new research from Cambridge, Frances Climate and Environemntal Laboratory, U of New South Wales, and U of Hawaii, has used the tiny shells of plankton to decipher what is called bottom water in the Atlantic.

Bottom water is where the Gulf Stream goes when it reaches the far North Atlantic, north of Scandinavia. It is so salty from evaporation that as it cools it gets heavy enough to sink to the bottom of the Atlantic. As it does this it turns about and flows southward in what is known as the thermo-haline circulation that extends around the globe to the Pacific and back.

This research found that bottom water from the far North Atlantic was key and  the presence or absence of this bottom water in the far South Atlantic almost directly coincided with every single abrupt change (Dansgaard Oeshger event).

See this post for more on the Global Warming Hole from recent Ice melt in Greenland and this article we authored on Truthout.