Myth: Earth has Stopped Warming Since the Turn of the Century

I get this question all too often. It goes to show the power and tenacity of the deniers’ propaganda. This myth has been explained time and again, but their propaganda is more extensive than “ours.” And remember, “propaganda” can be both negative and positive, false and true.

The voices of vested interests and even some who should know better, especially in the media, keep reporting what they hear from various sources that tell them that Earth’s temperature has not increased since the turn of the century. Beyond being patently untrue, all of these people are blindly ignorant of some very plain and simple science That simple screams that this apparent vision of a flattening temperature trend is induced by smoke and mirrors.

They are telling correctly that what they see is a flattening of the temperature trend. This is a valid vision along only the thinnest of lines of reality. It as correct as when someone tells you that they see a vast lake over Death Valley on a hot summer afternoon when looking into the sun. It’s a mirage and nothing more. Our temperature in scientific climate terms, in statistical mathematical terms, has no more leveled out than there is a vast lake in Death Valley.

I will lay out the reasoning for ending the repetition of this myth once and for all one more time: 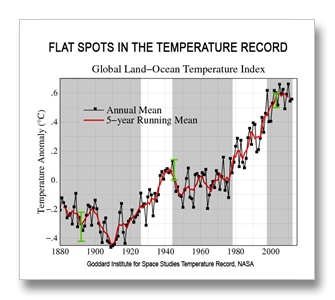 2) We have seen two “flat spots” in the temperature record that are much longer and completely comparable to the current one. The 1880s to 1930s is the first and the 1940s to the 1970s is the second. The first was natural climate variation, the second was cooling aerosol pollution (smog) from developed nations.

3) The beginning of our current “flat spot” was defined by the 1998 Super El Nino. It caused an unprecedented jump in the thermometer record of Earth’s temperature that was a full one third of all warming that Earth has experienced since 1850. This Super El Nino heat spasm was nearly twice as much as any heat spasm ever recorded. Because our current “flattening trend” is so short relative to the others in the record, it is conceivable that the apparent flattening trend could continue for some time longer.

4) The “flattening” itself has been accentuated by relatively “new” aerosol pollution (smog) coming from the rapidly developing Asian nations. This pollution and resulting cooling is not reflected in model projections and like the smog of the post WWII era, it is cooling Earth’s temperature, or masking additional warming. The estimates of this “masking” are in the range of 1.5 to 2.5 degrees F. If we look at this much extra warming since it the rapid industrialization of Asian nations began about the turn of the century we see that the trend is about the same as the “heat spasm” that happened with the Super El Nino of 1998. In other words, there is an enormous amount of warming masked by Asian smog that has “coincidentally” happened since the temperature “flattened.” 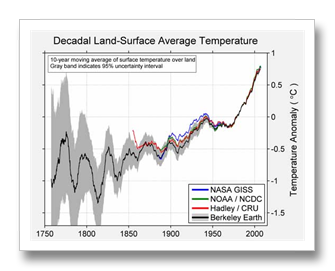 5) Climate change is not measured in short time periods because of natural fluctuations or “chaos” in weather. Using traditional climatological definitions we must have 30 years of weather data before we can define a trend. Using just a ten year averaging we can see that the apparent “flattening trend” simply disapears.  Climate scientists call this a filter. To appropriately view climate change, one must use filters to remove the noise. This “noise” is the chaos of natural variations.

6) The increasing atmospheric CO2 trend has not “flattened.” Since 1998, the CO2 concentration in our atmosphere has increased nearly 10 percent. There is something masking the increase in temperature. It is likely a combination of natural cycles and increased cooling smog from Asia. If Earth’s temperature had truly stopped increasing, our CO2 concentration would have stopped increasing too. 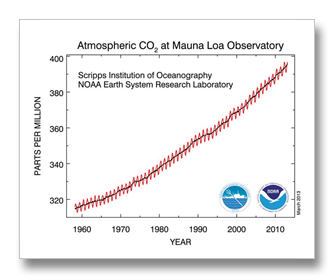 Emission controls have not been implemented. CO2 emissions are increasing at rates that are faster than anything in the record—even with the effects of the Great Recession. Warming has been shown to be tracking exactly according to projections of the first climate modeling of the IPCC in 1990, not as myth creators would have us believe that warming is “less” than has been modeled. Now the great concern of climate scientists is that air pollution concerns in Asia will result in their smog being cleaned up. This has happened before in the 1970s in developed nations and the cleanup took only ten years. And because aerosol pollutants are very short lived, the temperature rebound was rapid. Now that we have seen so much warming and our global thermostats—Arctic ice and cool ocean waters—have seen so much warming, the future could see much more rapid rises in temperature than have been modeled because our behavior keeps getting worse, not better.