Much is being said about the IPCC report telling us that there has been a pause in warming. It says no such thing. Not only does it say no such thing, it says that that Earth systems warming (atmosphere, land and ocean) has continued unabated.

August was the fourth warmest August ever recorded globally, September was the 343rd month in a row that the global temperature has been above the 20th century average. Australia is set to break its all time annual temperature record in 2013. The U.S. shattered its all-time temperature record by more than a full degree in 2012. That year in the US alone, 34,008 daily high records were set and only 6,664 record lows.

This is what the new report says about global temperature (from the first major section of the Summary for Policy Makers, the first four paragraphs, in the order that they appear in the report):

Each of the last three decades has been successively warmer at the Earth’s surface than any
preceding decade since 1850. In the Northern Hemisphere, 1983–2012 was
likely the warmest 30-year period of the last 1400 years.

The globally averaged combined land and ocean surface temperature data as calculated by a
linear trend, show a warming of 0.85 °C, over the period 1880–2012, when
multiple independently produced datasets exist. The total increase between the average of the
1850–1900 period and the 2003–2012 period is 0.78 °C, based on the single
longest dataset available.

For the longest period when calculation of regional trends is sufficiently complete (1901–2012),
almost the entire globe has experienced surface warming.

In addition to robust multi-decadal warming, global mean surface temperature exhibits
substantial decadal and interannual variability. Due to natural variability,
trends based on short records are very sensitive to the beginning and end dates and do not in
general reflect long-term climate trends. As one example, the rate of warming over the past 15
years (1998–2012; 0.05 °C per decade), which begins with a strong El Niño, is
smaller than the rate calculated since 1951 (1951–2012; 0.12 °C per decade).

The key here is in the last paragraph where it talks about natural variability, the short-term does not reflect long-term climate trends and as a specific example—the 15 year trend that began with the 1998 Super El Nino. 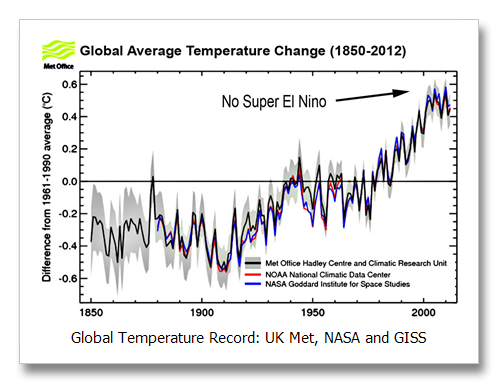 The 1998 Super El Nino is the cause of all this ruckus. El Nino is all about natural variability. If it were not for the Super El Nino, the vested interests voices would be complaining about something different because the so-called “flattening trend” would not be nearly so pronounced.

Vested interests and the fairness biased media continue to erroneously report the myth that earth’s temperature increase has stopped since the Super El Nino of 1998. Nowhere in the IPCC report (at least that I have read so far and I have read a lot of it) does it say that warming has stopped. And even more importantly, what the vested interests and the fairness biased media fail to mention is that three times since that massive Super El Nino record was set in 1998, we have set a new global high temperature record and tied the 1998 record one more time. 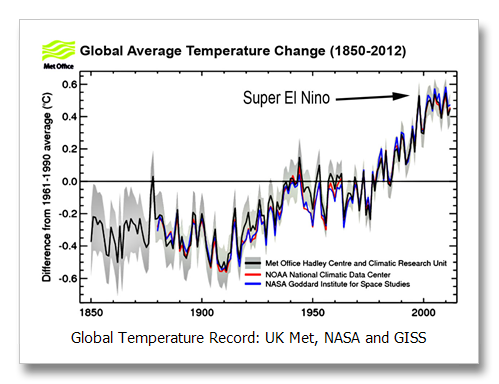 Now, this “Fairness Bias” thing. Literally, the media does not have a clue about the details of climate science. I mean in general, of course there are journalists that have a clue, some that are downright experts—and we do not see them arguing for these silly myths. By and large, most of the media simple presents both sides of an issue fairly, honestly and innocently. Their integrity is high, their ethics outstanding, but they don’t understand climate science. If they did, they would be reporting the same thing you see reported here and in all other science based reports.

The media’s innocence is real. They are reporting based on journalistic ethics and the impacts of the Fairness Doctrine and the Equal Time Act—all of which are meant to create fairness in the reporting of issues. Science is not an issue. The media is reporting the vested interests propaganda/press releases/tired old disproven science right along side of what is now a 95 percent certainty based on this extremely large scientific process that includes 209 lead authors, 50 review editors and 600 contributing authors from 39 countries. The report contains over 2,500 pages and draws from millions of observations from 9,200 scientific publications and includes the review of 136,000 comments. 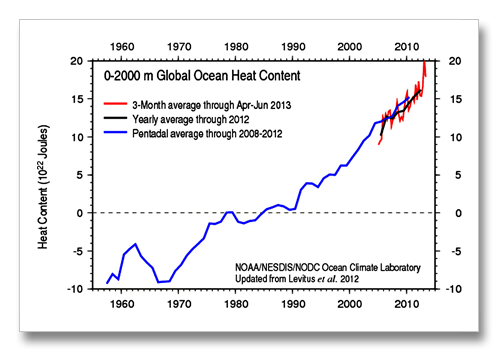 What the IPCC Report does say is that globally, earth systems have continued to warm unabated and, “Ocean warming dominates the increase in energy stored in the climate system, accounting for
more than 90% of the energy accumulated between 1971 and 2010.”