New modeling of permafrost shows that the worst-case scenario will see almost as many greenhouse gases emitted because of melting permafrost than man has emitted since the beginning of time. The time frame for these emissions is two centuries (190 years.) In addition, wetlands area of the far north will decrease by 75%. One of the biggest issues 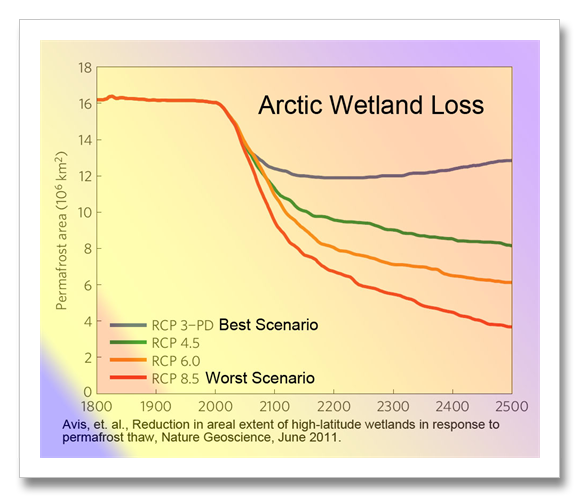 After the thaw and greenhouse gas release the permafrost melt lakes slowly dry up, or relatively quickly in time frames related to us humans. The climate is warmer, and not as hostile to plants that grow more than a few inches above ground, so shrubs and trees start to grow. Because this vegetation is taller than tundra, it sticks up above the snow and absorbs up to nine times more of the suns heat as does snow covered tundra. This is called a vegetation feedback and it warms the local climate more. A warmer local climate, over land, warms the ocean, adjacent to land. This melts more sea ice. With less sea ice there is more open water because the ice starts freezing later in the fall and melts earlier in the spring. this means the Arctic ocean can absorb more heat and the sea ice spiral decline continues.

Globally, a warmer Arctic means changes to the jet stream. It means Arctic storms have more moisture because they are warmer and they contain more moisture because the Arctic Ocean has less sea ice allowing more water evaporation. The jet stream pushed the warmer arctic storms further south (they are still really cold, just not as cold as before) and the bigger storms moving further south have bigger affects across larger stretches of the middle latitudes.

These feedbacks continue to increase until it is so warm that sea ice does not form at all. The challenge is determining when this point is reached. Right now, the IPCC says this will not be a problem in the 21st century, but some scientists are starting to challenge this assertion. This has happened before, 20 or 40 million years ago, but Earth was an entirely different place then. The continents were aligned more along the equator ocean currents were vastly different. The models say that today, without the great freezer around the north pole, temperatures would be higher than anything every experienced in the history of Earth, since green plants were on land allowing more of the sun’s energy to be absorbed and stay on the planet. To have this kind of thing happen when our continents are grouped more towards the north pole is completely unprecedented in the history of Earth, when there were green plants on land.