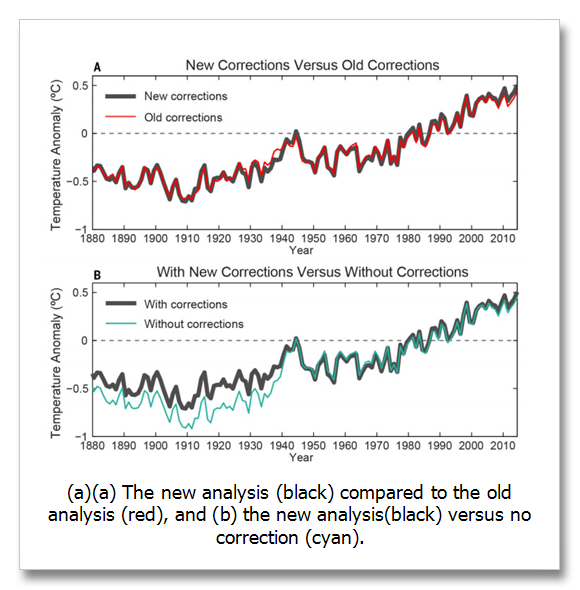 Final Sentence “Indeed, based on our new analysis, the IPCC’s (1) statement of two years ago – that the global surface temperature “has shown a much smaller increasing linear trend over the past 15 years than over the past 30 to 60 years” – is no longer valid.”

This new analysis says that’s simply wrong. IPCC themselves says that this statement includes the mega El Nino year of 1998 that biases this statement. But, the media has not included this caveat in their reporting.

The new work includes biases that were not included in the IPCC work as well as the record warm year of 2014. This NASA work includes discussion of three major biases: “an increasing amount of ocean data from buoys, which are slightly different than data from ships; an increasing amount of ship data from engine intake thermometers, which are slightly different than data from bucket sea-water temperatures; and a large increase in land-station data that enables better analysis of key regions that may be warming faster or slower than the global average.”

Ship based data is cooler than buoy based data because of sampling techniques. The IPCC did not include this bias in their 2013 report. Bucket based ship temperatures changed after WWII to use intake water temperature sensors resulting in a cooling bias as well. Land based temperature records have also increased in accuracy recently with a greater coverage of reporting stations, mostly in the Arctic.