The Latest on Forest and Ag Sequestration – Good, But Not Near Enough 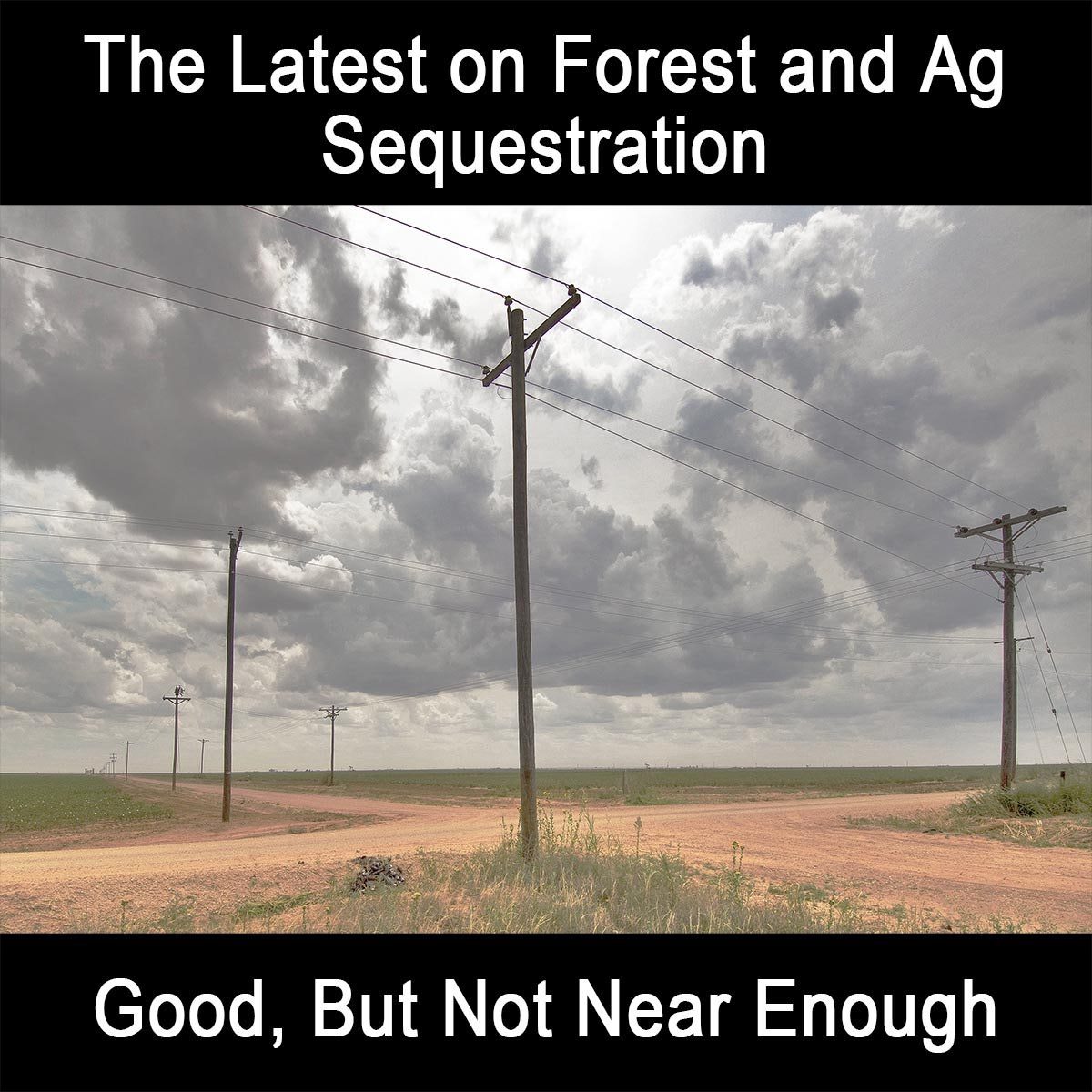 The Latest on Forest and Ag Sequestration – Good, But Not Near Enough

Twenty authors from all across the world, led by Stephanie Roe at the University of Virginia in a review article in Nature Climate Change titled, Contribution of the land sector to a 1.5C world, have reviewed the available academic literature on sequestration of greenhouse gases in the land sector. They found that globally, enhancing the land sector with varied, numerous and detailed strategies, we can feasibly and sustainably generate a 6.5 gigatons annual (7.6 gigatons using bioenergy with carbon capture and storage or BECCS) carbon dioxide equivalents (CO2eq) sequestration (CO2, CH4, N2O, etc.). The key here is “feasibly and sustainably.”  The academic literature in general does not robustly include this feasible and sustainable caveat, but realistically this is the only way to deal with any strategy to remove greenhouse gases from our atmosphere. An example of feasible would be reforestation on lands that can plausible grow trees. It’s surprising how many academic works assume we can grow trees in places where they likely will not grow, or assume that planting trees foreign to a region is appropriate. An example of sustainable means that the sequestration strategies for of enhancing forest, agriculture or soils sequestration capacity does not infringe upon the rights of individuals or cultures, or can be accomplished without environmental degradation.

This research evaluated feasible and sustainable sequestration research as well as the literature that did not, or did not fully evaluate strategies that were feasible and sustainable. They used both top down and bottom up rationale. “Top down” considers systems where governance and regulations drive the process. “Bottom up” is the piecing together of systems to give rise to more complex systems. What they found was that average of all the literature reviewed showed 14 Gt (top down) and 15 Gt (bottom up) CO2eq sequestration (including BECCS) was technically plausible.

Now here’s the challenge: Globally every year land systems emit 10 to 12 Gt CO2eq. So when we are considering feasible and sustainable sequestration (often referred to as justice and equity issues,) the 6.5 Gt (7.6 Gt with BECCS) CO2eq removed from our sky does not even reduce the annual emissions from the land sector to zero.  This includes all the forest and agricultural conservation, reestablishment and enhancement that is feasible and sustainable.

Does this contradict with other science and advocacy – absolutely. Do we then disregard this work? Absolutely not. So then, what do we believe?

The bottom line is that science advances regularly. Next week, something new will come out that conflicts with this work – and remember, this work is simply a summary of all available research published to date.

A prime example of conflict in this particular discipline of science is a report in the journal Science in July 2019 that garnered significant popular media titled The global tree restoration potential, by Jean-Francois Bastin et al. With this work the authors posit that planting a trillion trees is feasible and sustainable and it can solve all of our global warming woes. This article has been rebutted again and again with numerous reasons why planting a trillion trees is either not feasible, or that assumptions made in their report are inaccurate, incomplete, or unsustainable.

This work by Roe et al., is a road map. It’s a good one, likely the best produced to date. Things will change again and this is good, even if the changes are less optimal than previous work. But this work does robustly represent the voluminous research already accomplished in land sequestration and enhancement. It’s an average, but an average generally does a good job of representing reality when research is robust.

What it tells us is that the land sector can not solve the climate change challenge alone, and that alone, we cannot even get to net zero emissions from the land sector alone with enhancement and conservation strategies. So in addition to decarbonizing our energy infrastructure, and doing all of the complicated land-based sequestration strategies that are feasible and sustainable to the maximum amount, we must still remove more carbon dioxide from our atmosphere to not only limit, but to reverse warming. This means that we need to develop methods to remove carbon dioxide — and other greenhouse gases — from our atmosphere, either from the oceans, or with traditional pollution treatment strategies that involve industrial processes, like human sewage treatment.

Our oceans appear to have an enormous capacity to remove carbon dioxide from the atmosphere, but at what cost to the environmental and to cultures? We don’t know yet. Research on ocean sequestration is far behind that for land sequestration. Oceans might be able to do the job, but the research takes time to ensure that say, ocean fertilization is not only feasible, but it does not result in unanticipated environmental degradation or negative justice issues.

Time is critical; time that we do not have. Land sequestration is a good example. One of the main drawbacks of the “trillion tree solution by Bastin 2019 is the time it takes for a forest sequester a significant amount of carbon. Generally, this timeline is a century or thereabouts. We do not have a century to wait. Something similar about time can likely be said of oceans, but then again, we just don’t know yet because the research has not been done.

What we do know how to do is treat pollution. We have been treating pollution in our civilization for a century and the reasoning and paths are well developed. Some say removing carbon dioxide with traditional climate pollution treatment technologies is an exception. This is not really accurate.

We began removing carbon dioxide from the air in submarines in World War II to keep our sailors safe from carbon dioxide poisoning using potassium/calcium chemistry. This chemistry is being developed today to remove 500,000 tons of CO2 from the air to inject into oil fields to enhance recovery and the vast majority stays in the oil field permanently creating plausible what is coming to be known as net negative CO2 fossil fuels. At this scale, the research still needs to be completed, but in previous existing enhanced oil recovery operations the “net” on average is near zero.

In the 1950s a new technology came along to replace the potassium/calcium chemistry in submarines that uses more efficient amines. Amines are a broad class of chemicals that have been used in chemical refining processes since the 19th century, and in about the 1950s their use became widespread globally in chemical processes and are one of the mainstays in chemical processing today.

There is much more work that must be done on carbon dioxide removal with reaching out to the oceans being very important, but time flies and we have advanced far beyond the time when climate scientists said 30 years ago that if we delayed, our mission would become much more challenging. We delayed and the challenges now border on unrecoverable. To address these critical time frames, we need to do everything we know how, with a priority on doing those things we know how to do best.

Those things we know how to do best today are scaling industry to meet demand. The cost of photovoltaic energy generation for example has fallen from when we had proven the technology thirty years ago, by 100,000 percent. Most of this fall has been in the last decade because of giga scaling.

We know how to scale – ask Henry Ford, we build 74 million automobiles globally every year. Look to microchips, cell phones or gigabattery factories. It’s everywhere today, demand is high. The demand for greenhouse gas removal is even higher. We need to do what we know how to do best, as fast as we can, before it is too late.

To finish up this summary of Roe’s land sector review, to get a better handle on the specifics, I offer this quote from a personal communication with professor Roe where I asked about the difference between their technically feasible carbon dioxide removal (CDR) numbers and sequestration from the land sector that was feasible and sustainable, “On your question about CDR, our roadmap (Fig 6) has 6.5 [Gt CO2eq] of CDR (7.6 with BECCS), 3.6 from restoration of forests, peatlands and mangroves, 1.6 from forest management and agroforestry, 1.3 from soils carbon sequestration and biochar, and 1.1 with BECCS. These numbers represent feasible and sustainable mitigation potentials from the bottom-up literature (cited in Fig 6, and detailed in Table 5 in  SI – supplemental information).”

Their roadmap is below in Figure 6 from Roe 2019. It’s a complicated map but then, so is our advanced civilization. Paul Hawken’s Drawdown is a much better map with more twists and turns, but this map has better numbers: 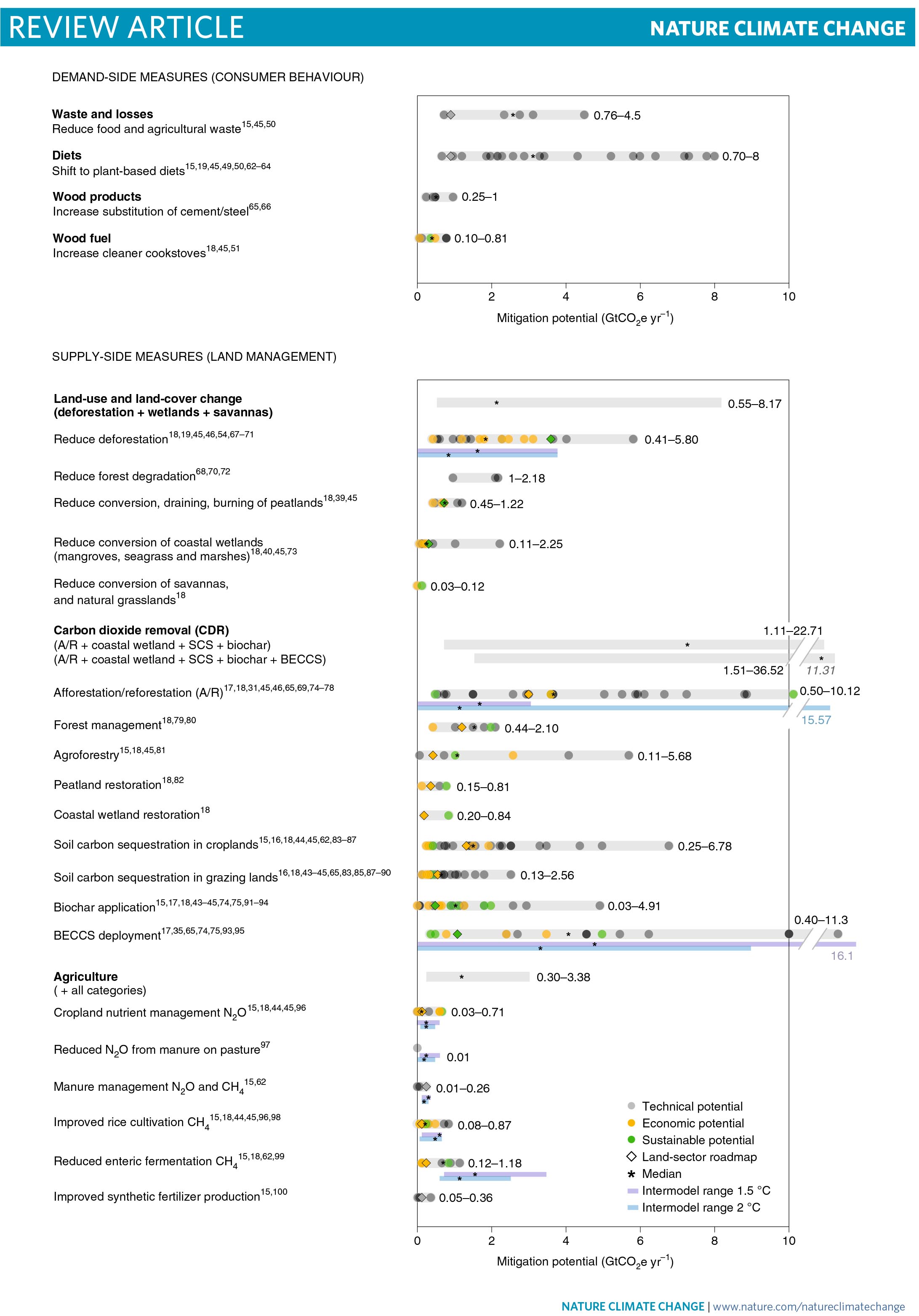