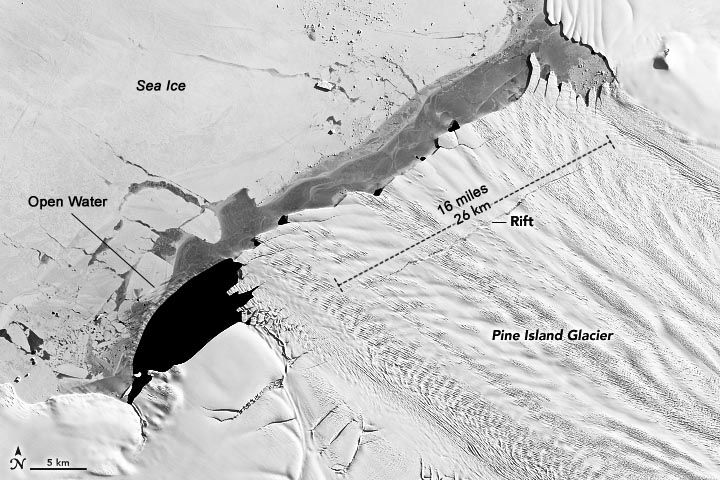 NASA: Pine Island Glacier rift for iceberg B-44 that calved September 25. This calving is one of an increasing number from this critical collapse initiating area of the West Antarctic Ice Sheet where stresses have recently changed. Rifts are forming in the center of the ice stream now, instead of propagating from one side. The reason is extreme underice melt of up to 230 feet per year is creating a weakness in the center of the ice flow, where no weakness existed before. (Click for high res image.)

Ice scientists have been warning us since 2006 that the West Antarctic Ice Sheet (WAIS) has begun its collapse. Giant icebergs are a symptom that collapse initiation is underway. The continuing laissez-faire attitude of the press to these events is counter intuitive and even dangerous, and represents a major disconnection between an understanding of the science, competent journalism, and real-life risks and consequences.

The press response continues to parrot the words of scientists, but completely misinterprets valid meaning. If a doctor or engineer were to take the attitude of the press with regards to this and almost all other issues related to climate change, licenses would literally be revoked.

Scientists speak in terms of scientific certainty and statistics. Parroting them is not journalism. If there is a 5 to 10 percent chance that something is not absolutely certain, we get a response from scientists that “it’s not certain, whether this event was caused by climate change or not.”

Doctors and engineers are not scientists, they are professionals. To make decisions they use professional judgement instead of scientific certainty. The two are vastly different, though equally important to our civilization: If there was a 90 to 95 percent certain chance that one had cancer, and a doctor said, “Well, we can’t say for sure so we are not going to act,” what would be the response? If an engineer said that there was a 90 to 95 percent certain chance that the wheels would fall of one’s car and no action was taken because they weren’t absolutely certain, what would happen?

This is exactly what climate scientists are saying and exactly what the media is parroting only scientists say this because they must because of the rules of certainty and statistics. The media is supposed to interpret the science into plain English. That they only continue to blindly repeat is unspeakably dangerous and does not communicate reality.

Scientists have been warning us since 2006 that evidence showed collapse of the WAIS has begun. NOAA in the Spring of 2016–the same people who issue hurricane warnings and myriad warnings for extreme events–have issued what can only be labelled an ostensible ice sheet collapse warning for the WAIS of 10 feet of sea level rise by mid-century.

This berg from the Pine Island Glacier is named B-44 and at 72 square miles, it’s not the size, but how and where the berg calved that sends the message. To start with, these things are happening much more often than in the past. Discharge from the Pine Island Glacier has increased 500 percent in the last 20 years of data prior to 2011 (Favier 2014).

The reports of glacial discharge from ice sheets is a never ending flood of papers telling us how this or that flow is speeding up because of this or that reason relating to warming. Greenland for instance, has seen total ice discharge increase 500 percent since the turn of the 21st century (IPCC 2013). 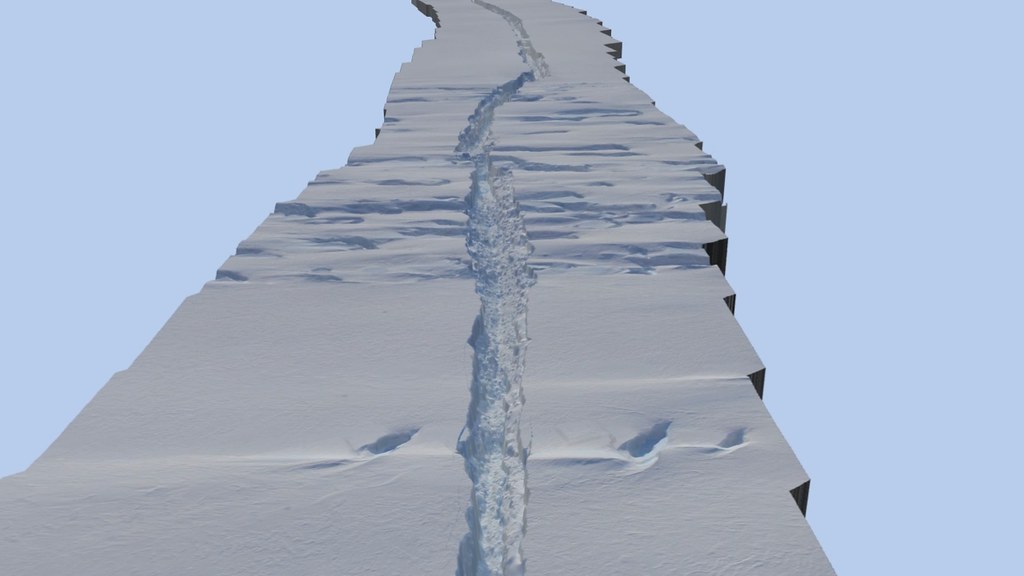 The NASA Animation above is from one of the previous Pine Island Glacier calving event rifts in 2011. NASA put the above video together from Airborne Topographic Mapper data out of a DC8. From NASA: “The path of the crack in this animation stretches roughly 18 miles in length (the actual crack is much longer), with an average width of 240 feet; it was 820 feet at its widest. The canyon ranged from 165 to 190 feet deep, with the floor being roughly at the water line of the Amundsen Sea. Radar measurements suggested the ice shelf is about 1,640 feet feet thick, with only 165 to 190 feet of that floating above water and the rest submerged.”

This particular calving event from the Pine Island Glacier, Amundsen Sea Embayment, West Antarctica, comes from an area known as the “weak underbelly” of the WAIS. This is where WAIS collapse control occurs, like removing a stopper from a bottle.

Several glaciers flow into Amundsen Sea Embayment which serves as the outlet for about 20 percent of West Antarctic Ice Sheet (WAIS) discharge, and ten percent of total global sea level rise.  Among these glaciers are the Pine Island and Thwaites, two of Antarctica’s top five largest glaciers. The glaciers of the Amundsen Sea Embayment hold back the West Antarctic Ice Sheet’s mile high interior ice.

But the WAIS is unstable. It sits on bedrock a mile below sea level and is partially buoyed up by sea water. It’s a marine ice sheet, the only one left on planet Earth. During ice ages there were many marine ice sheets with their bottoms grounded below sea level, but now only one remains. They have all disappeared because they too, were inherently unstable. Warming enhances this instability.

With the glaciers of the Amundsen Sea Embayment, the collapse risk has been defined by ice penetrating radar and autonomous undersea vehicles. What has been found is that warming ocean waters are melting the bottom of these outlet glaciers far faster than melt from above.

The melt beneath the Pine Island is so great that its center has begun to sage. This has become evident in the new fracture patterns appearing, and specifically the one that calved Berg B-44. This sagging was another one of those gracious accidental discovery, allowed by satellite photography and the low sun angle in Antarctica.

We know that the bed of these glaciers is deeper farther inland than at their outermost edges where they are discharging now. This inland depression was caused by the great wight of the ice sheets pushing down on Earth’s mantle.

When the ice is deeper inland, as the outside edge is eaten away, the inland ice becomes more buoyant and lifts the bottom of the ice off of bedrock allowing more warm ocean water beneath.

The extra melt is now changing how icebergs form, or adding a new way that they form. The new cracks that appear in the Pine Island glacier are now starting in the middle (Joung 2016), because of the sagging due to greater melt in the middle. Before about 2011, icebergs forming rifts began along the margin of the ice stream.

Melt beneath the ice  has been estimated at up to 230 vertical feet per year in this area (Khazendar 2016). Similarly, but without the great keystone effect of the Amundsen sea Embayment, ocean water extends up to 400 miles beneath the ice across much of the Ross and Ronne ice shelves that buttress much of the remaining WAIS.

West Antarctic Ice Sheet Collapse Began Shortly After the Turn of the Century… Scientists have been warning since 2006 that the West Antarctic Ice Sheet was collapsing. Vaughan summarized the science around WAIS collapse beginning in 1981. While the mechanisms for ocean melt were present in publication from the early 1990s, it was not until the early 2000s that work first showed definitive evidence of thinning, grounding line retreat, and ice stream acceleration in one of the most sensitive area of West Antarctica, the Amundsen Sea Embayment. Vaughan concludes that if these symptoms are indeed precursors to collapse, then collapse has begun. From what we know today, he was absolutely correct.
Vaughan, West Antarctic Ice Sheet collapse – the fall and rise of a paradigm, Climatic Change, 2006
From the University of California Jet Propulsion lab and the California Institute of Technology (abstract): “Upstream of the 2011 grounding line positions, we find no major bed obstacle that would prevent the glaciers from further retreat and draw down the entire basin.”
Rignot et al., Widespread, Rapid Grounding Line Retreat of Pine Island, Thwaites, Smith and Kohler Glaciers, West Antarctica From 1992 to 2011, Geophysical Research Letters, May 27, 2014.
From the Polar Science Center at the University of Washington (abstract):  “Except possibly for the lowest-melt scenario, the simulations indicate that early-stage collapse has begun.”
Joughin et al., Marine ice sheet collapse potentially underway for the Thwaites Glacier, Science Express, May 12, 2014.
(paywall)