I just returned from a recon trip to Padre Island where I drove the entire 90 mile 4×4 beach from Brownsville to Corpus in preparation for a fund drive to make a new sea level rise film. Please donate if you can, otherwise—tell your friends and thanks! http://www.meltonengineering.com/donatepage.htm 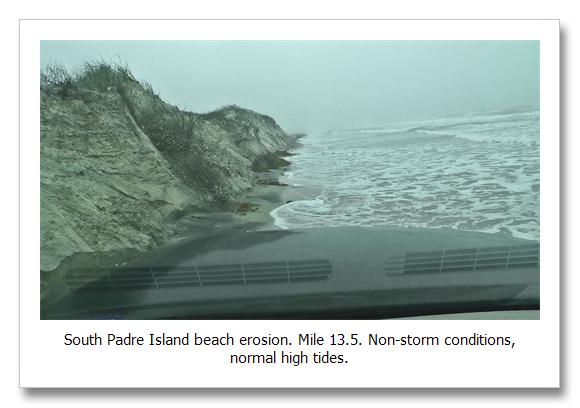 Mansfield Pass (boat access & jetties) cuts the island in the middle with a 25-30 foot deep, 1,000 foot wide Corp of Engineers dredged channel. So in all, 180 miles of 4×4 adventure were involved because going north on South Padre from Brownsville I had to turn around at the jetties and drive back to pavement, then drive all the way from Brownsville to Corpus to get back on the beach and four-wheel back south to the jetties again.

The sea level rise news is not good. South Padre has a half dozen places where the beach is gone for a couple of hundred feet to well over 1,000 feet. No storms, just normal monthly high tides. One has to drive in the surf at high tide to get back on the beach trail which runs along only a 50 foot wide beach in many places. Some of the eroded dune faces were 12 to 18 feet tall. Even at low tide the truck still got its feet wet.

To get through one has to time the waves, and then hurry or slow to a crawl depending on how high the water gets as the waves wash in beneath your truck. The gate keeper at Access Road 6 for the County Park—the last access road before pavement ends—said that in November the beach was closed 10 times because  water had come all the way up to pavement on the inland side of the dunes. No storm, just the annual high tide. 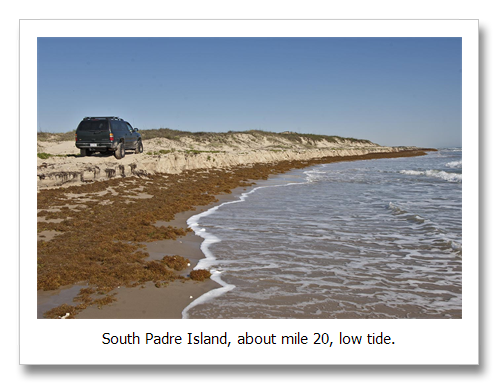 Two local old timers I  talked to said that in their 50 to 60 years of beaching on South Padre, they had never seen anything close to this except after a hurricane.

Video clip of a somewhat harrowing drive through The Narrows on South Padre: http://www.meltonengineering.com/South%20Padre%20Island%20mile%2013.5.wmv

Padre Island National Seashore (North Padre) was a little bigger than last fall generally, but nowhere was the beach wider than about 80 feet from the base of the dunes to the normal high tide mark. A big cold front had blown in and blew out all the water to create some really low tides. I had 18 miles of easy driving on hard packed sand, but this gave way farther down the beach to the usually grueling slog through a faint trail in very deep sand. The eroded areas from last October at mile 53 to 55 now have a 20 to 30-foot wide beach above high tide where the trail runs, but there was new erosion from winter’s high tides on the dune side of the trail with one to three foot tall erosion faces at the foot of the dunes. These began at mile 42 and became continuous at mile 48 all the way to mile 60 at Mansfield Pass. 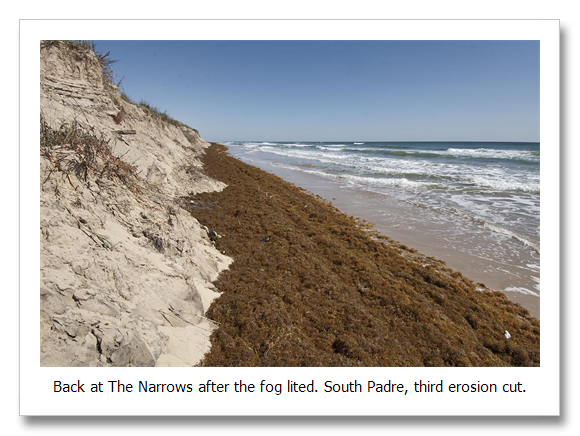 The flats on the back side of the island on the Laguna Madre are still covered up with water, maybe 20 percent less than last October in some places. (see beach report November 4, 2013)  In other places though there was no sign of the flats, it was all water all the way across the Madre a couple of miles to the mainland.

Other than all of that, Padre is still a wild and beautiful place, maybe even more wild since the four-wheeling is so tough with the bad trails and the challenges of the water crossings. There were even fewer folks way down the beach than usual. The US Fish and Wildlife Turtle Patrol was in force, looking for the nesting endangered Kemp’s Riddly sea turtles. The season had just started, no turtles yet, but Turtle Camp at mile 35 was full of young biologists on ATVs driving 10 hours and a hundred miles a day on that grueling beach trail.

The Polar Vortex this winter created unusual cold (at least unusual for the last 20 years) that stunned lots of turtles. Seven hundred were rescued and about a hundred fatalities were reported. That’s a lot of turtle rescues! Thanks to USFW, the National Park Service, Texas State Parks, all the South Padre Island turtle people and all the volunteers up and down the coast.