Beach Report: Padre Island National Seashore – Have We Tripped Over a Threshold?

(See the new gallery about this trip to Padre Island National Seashore: link) 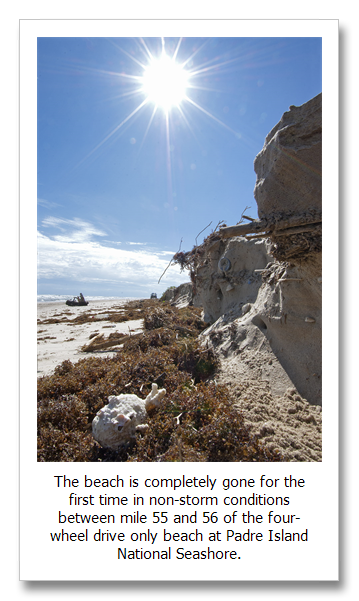 Padre Island National Seashore, October 19 and 20, 2013 (PINS) First day out: Saturday October, 19th 2013. We had planned a leisurely trip, birding, staying in town at a hotel, eating seafood, light four-wheeling and enjoying the beach. Then, Friday night a ranger told us the beach had washed out a couple of miles from Mansfield Pass. Our grueling quest to find the washed out beach had begun.

We made it to mile 28 Saturday when high tide closed out the beach. The trail simply disappeared and there was no reasonable place left to drive. It took an hour and a half to get to mile 28. We new it would be a grueling slog back to pavement, but we wanted another seafood dinner, so we came about and plodded on. It took four hours to return.

My first film “The Ice and the Sea” was about Greenland and sea level rise on Padre Island National Seashore. You can see the film under the films tab on the top menu (or here). The Greenland work is stunning as well as the melt being astonishing. The work on the beach starts with my photography from 1984 showing just how big the sand once was on the Texas coast.

The beach has been a part of my life since the beginning. My home beach at Surfside, just south of Galveston Island is a shadow of its former self because of subsidence as well as sea level rise. There is still a beach there, but the first couple of rows of beach house have been claimed by the Gulf, and precarious vacation homes on stilts dot the edge of the surf. 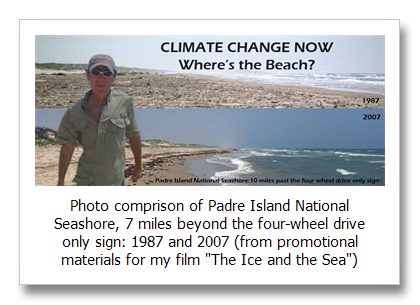 Subsidence on Padre Island National Seashore however is not an issue. Sand starvation may play a small role as it is playing on most beaches on the Gulf coast because of sediment trapped by freshwater reservoirs inland, but mostly on Padre, it’s sea level rise.

Even the National Parks Service is now acknowledging sea level rise on Padre Island. They have a new exhibit atop the lookout at the Visitors Center that explains why the beach is so small, and it does not say anything about subsidence or sand starvation.

The entire beach is a small remnant of its former self. It really started disappearing after the turn of the 21st century when ice scientists say “The Big Melt” began in Greenland. You have to see the series of comparison photos in the film. I lived it and still cannot believe.

The part of the beach that is completely gone now is between about mile 55 and 56 of the 60 mile long four-wheel drive only beach at PINS. At this point—wa’aaay down the beach (if you can make it this far), you will find yourself at what could be the most remote place in Texas. There is no crossing at Mansfield Pass. It’s 60 miles back to pavement, 55 of it beyond the “Four-Wheel Drive Only” sign.

This part of the beach is now covered in water at high tide all the way to the very foot of the dunes where there is an 18 to 48 inch eroding sand cliff. There are three areas with this type of erosion, each about a quarter to half a mile long. The ranger said if we did make to Mansfield and didn’t want to spend the night, hurry up and turn around before the tide closed out the trail. 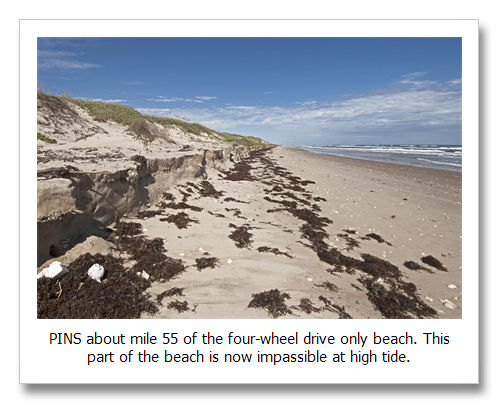 Within several miles of the pass on the north side is what is called the sand starved side of the pass. The beach current there runs north carrying sand along with it. When the current reaches the south jetty of Mansfield and slows as it is deflected out in the Gulf, it drops its sand load. The beach on the south side is about 1,000 feet farther out in the Gulf than the beach on the north side. This has always been the case because the jetties “starve” it of sand. Sometimes storms have washed out the beach here completely as it is now. But there have been no storms this season.

This season there were two small storms in the Bay of Campeche and one that hit the Florida Panhandle, but it’s quite likely that nothing around here could have produced this much erosion except sea level rise.

It is not unexpected for the beach to completely disappear here first. This is where it has historically been the smallest. With continued sea level rise, and maybe a little help from the little storms way off in the Gulf, the beach is gone. It may come back a little. Between 2007 and 2012 the beach grew a bit as sea level rise fluctuated and the dynamic beach processes after hurricanes Katrina, Rita and Ike played out. (and btw, none of those big hurricanes did this to mile 55/56 on PINS).

Sea level rise is accelerating overall and this is the beginning of what beach scientists call barrier island disintegration. We can stop it if we simply begin to treat the climate pollution in our sky. It will cost no more than what we spend on health care every year in the U.S. before Obamacare. It’s only pollution. We spend about the same amount every year on the Clean Water Act and Clean Air Act treating water and air pollution of other kinds. It’s only pollution. We will not stop emitting carbon dioxide, but unless we start the simple act of treating climate pollution, expect more unpleasant surprises.

The rest of the beach is still open. It’s relatively easy driving at low tide and typically challenging for this era at high tide. There are some areas of erosion along the entire beach that are new this year. For the last ten years it has just been a diminishing beach phenomenon. Now we seem to have crossed a threshold.