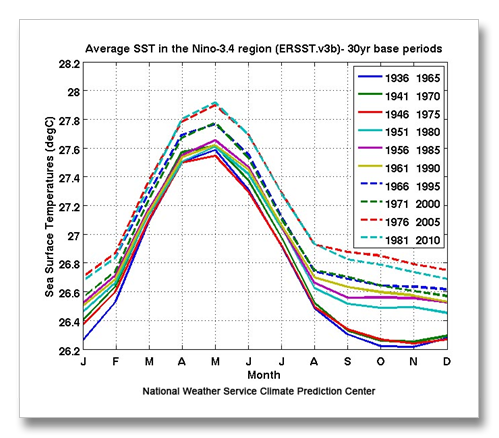 Increasing warming in the Pacific has been difficult to prove because of El Nino and La Nina. ENSO as it is known, or El Nino Southern Oscillation, is the periodic change in south and equatorial Pacific ocean temperatures that can wreak havoc around the globe. El Nino (warming equatorial and south Pacific ocean temperatures) conditions bring famine in western south America, floods in some areas and drought in others. La Nina (cooling…) brings drought in southern North America and increased numbers and extremeness of the Atlantic Hurricane season, to name a few.

Because of the quasi-periodic nature (chaotic to you and me) of El Nino and La Nina, and the dynamic nature of these events (the way they change) measuring them has been problematic. there are several different ways of doing this and none of them are adequate according to the authors of this paper published in Nature Climate Change by researchers from Cooperative Institute for Research in Environmental Sciences, University of Boulder and NOAA/Earth System Research Laboratory. Until now at least.

Live longer and more science happens and this is what happened, again. What these researchers have done is found a way to compare the different ways to measure ENSO. Once this was done, they could then remove the seemingly chaotic warming/cooling patterns of  El Nino and La Nina from the southern and equatorial Pacific temperatures and walla!—we get a clear view of warming in ocean temperatures.

Before this work, the chaos in southern and equatorial Pacific temperatures have clouded climate modeling efforts. There was supposed to be warming, but the temperature data simply didn’t show it. The chaos from El Nino and La Nina created a record of uncertainty.

New scientific technique—well not really new, but applied to this issue for the first time—has filtered the data and removed the crud. Now a pure temperature record shows us distinct and persistent warming.

AS the researchers tell us in the last sentence of their findings: “Here we provide a consistent historical Indo-Pacific SST trend with which to validate and verify climate models used for projections of future climate change.”