Legacy Climate Policy: The Scale of the Current Science and Need for DAC 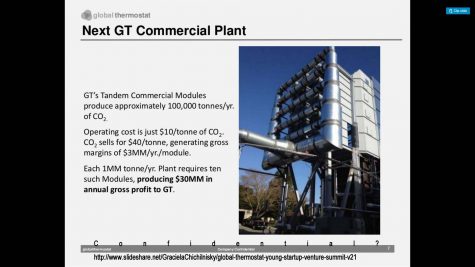 Global Thermostat’s machine can remove CO2 directly from the atmosphere for $10 per ton.

In the run up to the Paris climate talks, current policy is far behind. Virtually unknown is science stating that the solutions to treating climate pollution are simple, cheap and radically change a generation of policy we are currently trying to implement. Legacy climate policy being enacted today, and proposed at the Paris climate talks is less aggressive than Kyoto Era climate policy from the early 1990s. Since shortly before Kyoto was born we have emitted as much CO2 as we emitted in the previous two centuries. Policy is behind because of doubt cast by the perceived debate. Recent findings show that significant negative emissions reductions, four to six times greater than current commitments, are needed and the only way to do this is with direct air capture (DAC) of carbon dioxide from the atmosphere.

Why have we tasked ourselves with the extinction of the most important, wealthiest and most influential “thing” in our civilization? The Fossil Fuel Industrial Complex extinction has been a staple of the climate change challenge for a generation. This “action” was widely and robustly supported by the science at the time that suggested the great risks involved required action. Research then and still, shows that emissions reductions can limit warming and the resulting damage to Earth and her inhabitants. But the limits have risen as we have dramatically increased greenhouse gas emissions.

Research by Peters from Norway’s Center for Climate Research, MIT and Exeter in the UK,  finds that if the EU, US, and Chinese commitments are carried out, all other countries would have to a commit to climate pollution mitigation 7 to 14 times more aggressive than the EU. The paper quotes; “Given such necessary and unprecedented mitigation and the current lack of availability of some key technologies, we suggest a new diplomatic effort directed at ensuring that the necessary technologies become available in the near future.” Peters does two thing that are conservative and classically understate the challenge. The first is using the 2 degree C safe limit and the second is assuming that DAC technologies are not available.

The 2 degrees C threshold is the best-case scenario we can hope for with current legacy policy with nearly three times the warming we have already seen (0.7 degrees C), that has already caused such a great increase in extremes. Realistically we should very likely be following the suggestions of much earlier research of 1 or 1.5 degrees C as the maximum safe increase in temperature to prevent dangerous climate change.

Exceeding the 1 degrees C limit was suggested to be radical as early as 1990 with the development of the threshold criteria for a safe  climate with the Intergovernmental Panel on Climate change preparatory work for their first report. “Beyond 1.0 °C may elicit rapid, unpredictable, and non-linear responses that could lead to extensive ecosystem damage.” Two degrees is described: “An absolute temperature limit of 2.0 °C can be viewed as an upper limit beyond which the risks of grave damage to ecosystems, and of non-linear responses, are expected to increase rapidly.” If 2 degrees C is where “grave” damage begins, limiting warming to 2 degrees C will reach the grave threshold.

It is widely believed that DAC is untested and economically infeasible. The untested part of this belief is simple. Man walking on the moon was untested until we did it. At least one test system exists today that shows DAC costs as low as $10 per ton or about a trillion dollars to remove 50 ppm CO2 from the atmosphere (Global Thermostat here-slide 7 and here). Penetration of this information into the public and policy is hampered by the perceived debate that created a new chapter to an old myth: “That the solutions will ruin our economies.”

A report by the American Physical Society (APS) in 2011 claimed DAC was infeasible because of costs. The report did not speculate on the recent science about new DAC technologies citing that there was insufficient evidence to evaluate and instead, evaluated WWII-era technology. In addition, the co-chair of this study was “a distinguished advisor within British Petroleum [BP] Refining and Marketing’s Research and Technology department.”

Because the APS report was hot topic in the news cycle, media everywhere picked up on it and the damage was done. The fact that APS did not evaluate the new technologies did not escape the third most prestigious scientific journal in the world (Nature), which published a rebuttal to the APS report, making the significant omission clear.

However, the news cycle had already run its course, and the Nature rebuttal didn’t make the headlines. As in the public conversations around smoking, acid rain and ozone depleting chemicals, the fairness bias of the media had been executed. The news cycle ended and reporting of the truth never made into the news. It took years to decades for the truth to be revealed with these other issues and so far, we are working on a generation with the climate change debate.

A paper in Science December 2015 by Anderson tells us: “Of the 113 (IPCC) scenarios with a “likely” chance (66% or better) of 2°C, 107 (95%) assume the successful and large-scale uptake of negative emission technologies. The remaining 6 scenarios all adopt a global emissions peak of around 2010. Extending the probability to a 50% chance of 2°C paints a similar picture. Of the additional 287 scenarios, 237 (83%) include negative emissions, with all the remaining scenarios assuming the successful implementation of a stringent and global mitigation regime in 2010. In plain language, the complete set of 400 IPCC scenarios for a 50% or better chance of 2°C assume either an ability to travel back in time or the successful and large-scale uptake of speculative negative emission technologies.”

Anderson too, falls into the fairness bias trap while suggesting DAC is “speculative” and in the “conceptual stage of development.” Valid points, but given the existence of Global Thermostat’s machine this opinion seems a wee bit reticent.

The IPCC did not quantify how much “a large net removal of CO2 from our atmosphere” is needed to prevent dangerous climate change meant when they made that statement in their 2013 report, but it recognized the need. A “large net removal” is “largely” more than emissions reductions alone. This amount of negative emisions has now been published in Nature Communications in August (Gasser 2105), as 105 to 135 percent of today’s annual emissions for the best case scenario (RCP2.6, 450 ppm CO2e, 390 ppm CO2) and 170 to 210 percent of today’s emissions with the worst-case scenario (RCP8.5, 1370 ppm CO2e, about 1190 ppm CO2]. However, because we are on the path of the worst-case scenario, and because it is likely that 350 ppm CO2 and 1 degree of warming are the actual “safe” levels of CO2 in the atmosphere, Gasser’s figures are probably understated to a significant degree. This means required annual negative emissions, beyond net-zero, are greater than the +/-20 Gt annually Gasser 2015 suggests for RCP8.5.