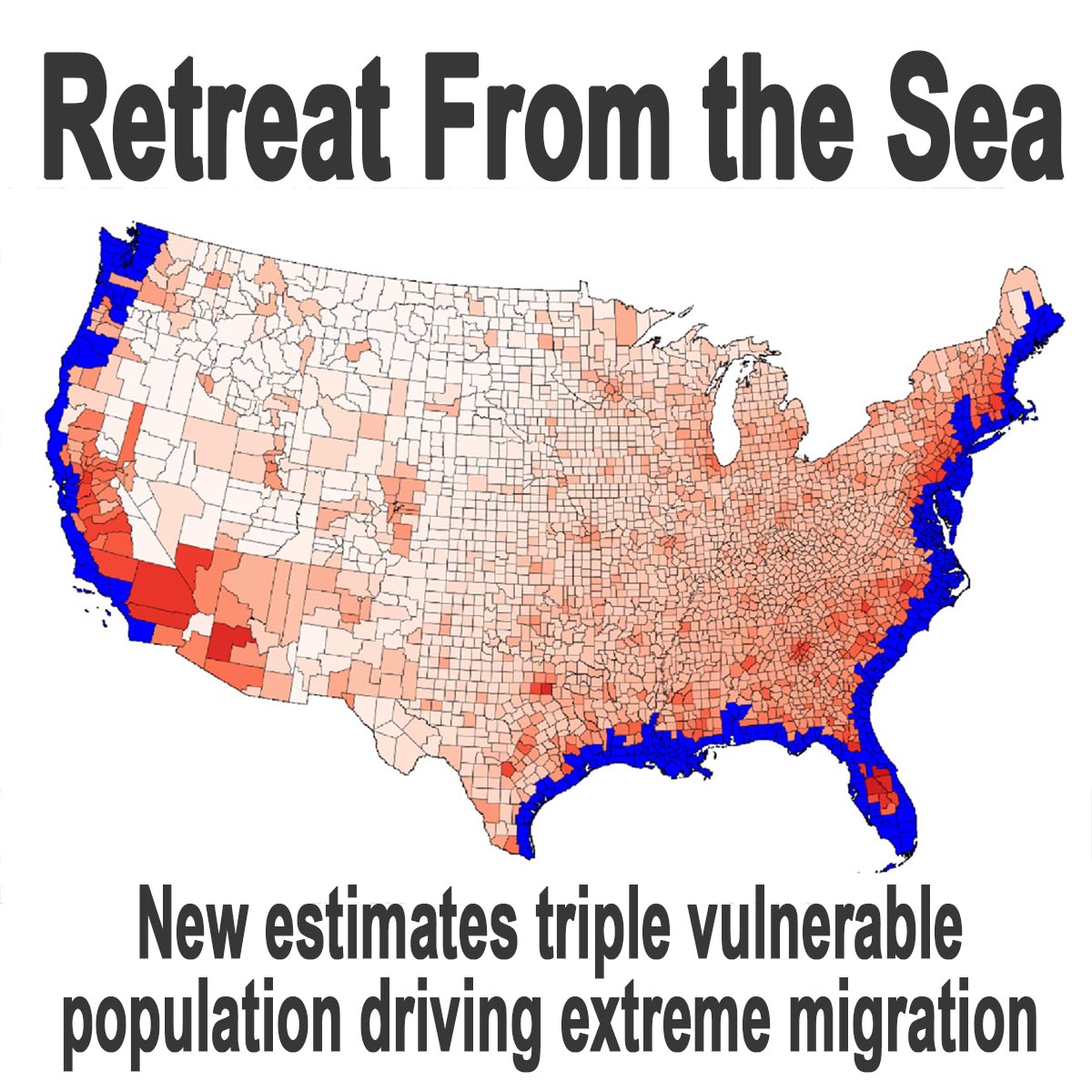 One of the biggest mistakes made in our climate culture today is equating future emissions with impacts from sea level rise. We have enough CO2 in our atmosphere, and likely enough warmth built up already not counting warming in the pipeline, to create unrecoverable economic scenarios.

Forced migration differs from migration patterns we have come to know in our contemporary world. We do not know yet exactly how forced migration from sea level rise will affect our society, but we are learning.  Work from the Georgia Institute of Technology, University of California at Los Angeles, and University of Ontario has used machine learning to give us some insight. (Robinson 2019)

Of particular importance are indirect effects where the authors say, “These indirect effects will cause accelerated changes for inland areas, particularly urban areas, that will observe much higher levels of incoming migrants than they would have without climate impacts,” causing “jobs shortages, decreased housing opportunities and even greater income inequality in coastal areas as the poor are left behind.”

This population estimate however uses old data based on top of vegetation satellite measurements. New estimates based on actual top of ground have increased the landward penetration of rising seas and tripled the population affected. (Kulp 2019) Kulp 2019 states, “This is especially true in densely vegetated and in densely populated areas,” where this study states the average error from buildings and vegetation is 12 feet in the US and 8 feet in Australia.

Consensus estimates of sea level rise are also much higher than before with a five percent probability of sea level rise of two meters (6.5 feet) by 2100. Taken together, the new ground surface satellite data and increased consensus projection of sea level rise by 2100 result in, as the Kulp 2019 states, “190 million people currently occupy global land below projected high tide lines for 2100 under low carbon emissions, up from 110 million today, for a median increase of 80 million. These figures triple [legacy data]-based values. Under high emissions, [this study] indicates up to 630M people live on land below projected annual flood levels for 2100, and up to 340 million for mid-century, versus roughly 250 million at present. We estimate one billion people now occupy land less than 10m [33 feet] above current high tide lines, including 250 million below 1m [3.3 feet].”

What makes this new data more important is a little understood fact about climate science and any science in general. This is that science in general has no safety factors. Science simply states the probability of occurrence (chance of occurance.) Using a standard safety factor that most of us are familiar with; the 100-year flood is an event with a one percent chance of occurrence in any year. Or more generally stated, a 100-year flood happens on average a once in a hundred years. We design our infrastructure, and purchase insurance for that infrastructure from flood, wind, drought, etc., to the 100-year occurrence. With the five percent chance of occurrence cited by Kulp 2019, this is an event that happens once every 20 years on average, or a 20-year flood.

New modeling of migration from sea level rise attempts to define new patterns of migration that are not present in our pre-climate change world. One of the critical questions new work on sea level rise migration by Robinson 2019 sought to answer is; where will climate refugees will migrate too, not just how many will migrate. Robinson 2019 states, “Climate migrants will be forced to move as climate change effects become more pronounced, directly through the exposure to ‘high-magnitude events’ such as large scale flooding from hurricanes, or indirectly through the cumulative contribution of ongoing localized events across regions.”

The corresponding author in this research, Bistra Dilkana, in the Eurekalert press release on Robinson 2019 says, “We hope this research will empower urban planners and local decision-makers to prepare to accept populations displaced by sea-level rise. Our findings indicate that everybody should care about sea-level rise, whether they live on the coast or not. This is a global impact issue… Sea level rise will affect every county in the US, including inland areas.”

This study found the greatest migration will be to inland areas immediately adjacent the coast, with more migration to areas like Houston, Dallas and Atlanta than previously projected. The study also identified Austin, Texas as the “top destination for climate migrants from the southeastern coast.”

By 2100, Robinson 2019 found that 13 million people could face forced sea level rise migration. As a result, “cities throughout the country will grapple with new populations. Effects could include more competition for jobs, increased housing prices, and more pressure on infrastructure networks.” Given the work of Kulp 2019 that shows that when true ground elevations are taken into consideration the sea level rise affected population triples; this means 39 million Americans could face migration pressure by 2100, or a similar population to the top 27 cities in the US, ranked by total population.

Further limitations of this study, beyond the elevation data identified Kulp 2019 are that, “people move due to sea level rise only when their homes are permanently flooded.” NOAA and the Union of Concerned Scientists work on chronic inundation from sunny day high tides tell us that resource abandonment will begin far in advance of actual inundation. NOAA and the UCS suggest that by 2030 to 2035, chronic inundation will “effectively” impact 190 US coastal communities with greater than ten percent of their populations enduring resource abandonment with 9 to 14 inches of sea level rise in the worst-case scenario. (see here)

And an editorial comment; when was that last time we heard of climate change impacts being better than the worst-case scenario?