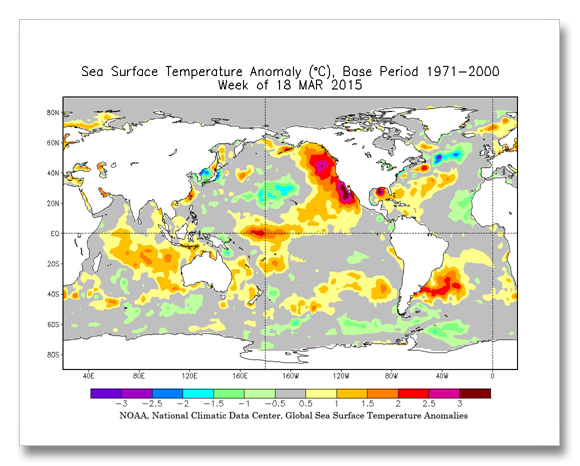 Whatever it has been that has kept the average global temperature from skyrocketing along with greenhouse gas concentrations is likely being overwhelmed. Of most significance is an unprecedented hot spot in the North Pacific that has probably signaled an end to the current cool phase of the Pacific Decadal Oscillation.

“The 2014 global ocean warming is mostly due to the North Pacific, which has warmed far beyond any recorded value and has shifted hurricane tracks, weakened trade winds and produced coral bleaching in the Hawaiian Islands,” he says. The press release describes how this unprecedented event has unfolded: “Sea surface temperatures started to rise unusually quickly in the extratropical North Pacific in January 2014. A few months later in April and May, westerly winds pushed a huge amount of very warm water usually stored in the western Pacific along the equator to the eastern Pacific. This warm water has spread along the North American Pacific coast, releasing into the atmosphere enormous amounts of heat—heat that had been locked up in the western tropical Pacific for nearly a decade…Record-breaking greenhouse gas concentrations and anomalously weak North Pacific summer trade winds, which usually cool the ocean surface, have contributed further to the rise in sea surface temperatures. The warm temperatures now extend in a wide swath from just north of Papua New Guinea to the Gulf of Alaska.” 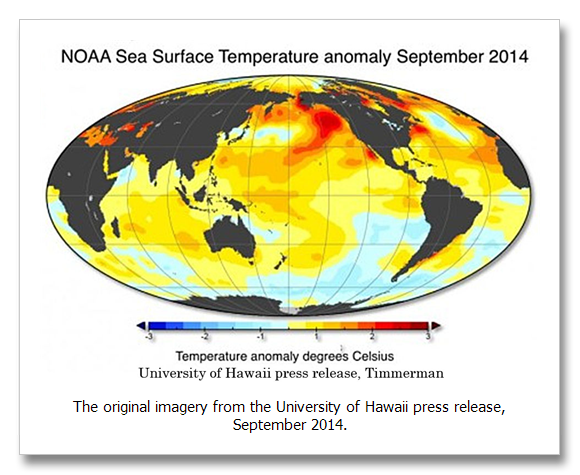 The press release concludes: “The current record-breaking temperatures indicate that the 14-year-long pause in ocean warming has come to an end.”