The Larsen C Calving of A68: Why it’s Climate Change Certainty 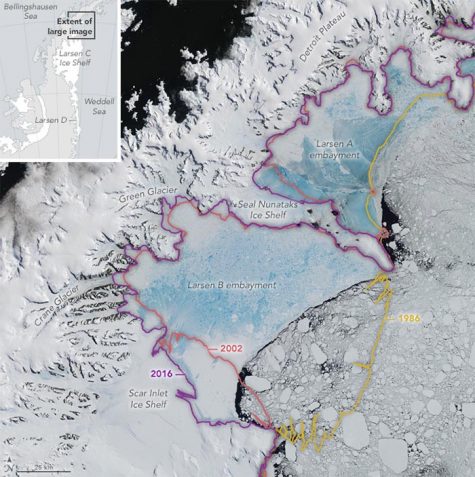 Previous Larsen Ice Shelf Collapses: “A” was in 1995, “B” in 2002. The collapses around Antarctica are increasing in frequency farther south as global warming progresses. NASA Image.

“Why not…” in this case is partially a discussion of  reticence, which scientists are very well known to posses. Reticence allows scientists to not blame something new if there is an existing mechanism that explains things. The reason they say it is not likely caused by warming is that this is indeed how ice shelves operate. They binge and purge. Their seaward edge constantly calves bergs (much smaller than A68) as ice flowing from inland places pushes outward towards the open ocean. Ice shelves are the recipients of glaciers dumping ice out of the interior, or in this case down from the Antarctic Peninsula mountains, as well as snow accumulating on the ice shelf itself. Ice shelf ice sort of pools, like magma flowing out onto a plain from an erupting volcano. The difference being that ice shelf ice floats as the seaward edge pushes out into deep water. With larger ice shelves, the floating edge can extend hundreds of miles from the inland grounding point where the ice shelf is thick enough to touch the bottom of the sea.

“Why not…” is also because of time and data. Science is made up of individual points of evidence that are all a little different. Statistics creates a clear picture of what the data mean. The number of icebergs this size  or bigger, that we have records of, is two. Because statistics don’t work very well with two data points, statistical science says that this is not because of climate change. Statistics are also not good at changing trends. Because it is warming, science says expect more icebergs and this is what we are seeing happening. It’s one thing to project, and then see that projection happen, than it is to confirm the event is happening because of what the model says. This discussion circles back up to the previous paragraph and reticence.

“Why not…” one more reason: Abrupt change. When a trend changes, it’s hard to tell if it’s simple a natural fluctuation in the system, a little chaos maybe, or if some big event truly is part of a new trend. Time plays a big role here.

Why the Calving of A68 Was Caused by Climate Change

of the interior. This discharge is so massive pools in bays The reasons why this event was caused by climate change are listed below. But there is another intriguing question that needs an answer first: “How in the world did it break off during the Antarctic mid-winter?” 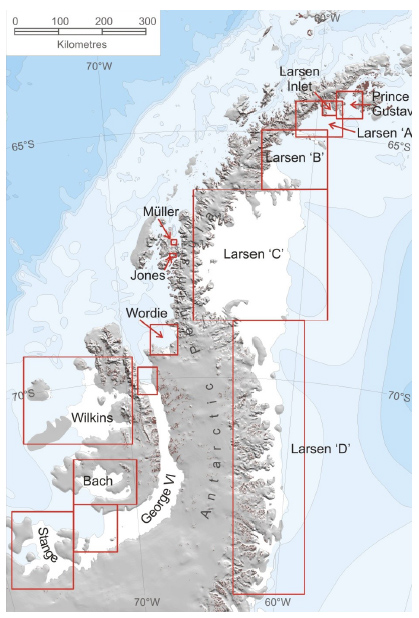 The Antarctic Peninsula and ice shelves. North is up. Wikipedia.

With mega bergs like this, wind is a big deal. It’s more of an ocean current/size of the ice sheet/wind thing. The ice sheet is always growing and calving. This time for some reason (explained below) the iceberg was one of the biggest ever recorded, so winds have a larger effect on it than normal. Winter winds are stronger than summer, and the south polar vortex is wacked out just as the north polar vortex, so different direction of stronger winds sustained for a longer period probably played a role.

The reality of why this event was caused by climate change is multifold. A big part is that ocean waters are much warmer than before, which melts more ice below, but above it still has not warmed above freezing. It can warm up gigatons in Antarctica and still not be above freezing. A warmer, windier earth also speeds up the flow of ocean currents beneath ice sheets in Antarctica. 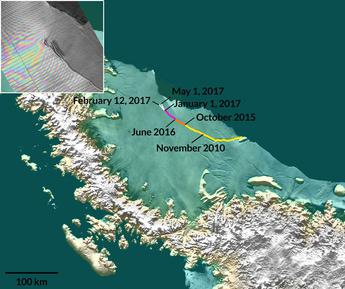 melt has occurred. This creates massive stress within the 1,750 foot-thick ice shelf as the ice sheet floats lower towards the ocean.

Melt at it’s greatest in underice troughs gouged by glacial discharge has been measured at 300 feet per year. It’s much less than this on average, but the idea is there: lots of underice melt has raised the bottom of the ice sheets hundreds of feet over the last 20 to 30 years. And the ice shelves float for vast distances. The Ross Ice Shelf (the largest in the world,) floats for 400 miles from the open ocean.

What happens with all this underice melt and very little top of the ice melt is that bending stress from the oceanward portion of the ice shelf melting more and floating lower than farther inland. With no melt above, for every 100 feet of underice melt the ice floats about 90 feet lower in the water. The resulting stress bends the ice sheet and increases the likelihood that it will calve massive bergs. These conditions are very different from the stable equilibrium state that existed in Antarctica just a few decades ago, that allowed the edged of the ice shelf and its thickness to stay mostly the same as it has been for the last 5,000 years.

And there’s is another mechanism that is creating a feedback to put even more warmer water beneath the ice: The melt pump.

Melt water is more buoyant than salt water because it is melted snow from the interior and contains no salt. So melt from under the ice shelves floats, up and along the underside of the ice sheet to the open sea, and literally “pulls” deep warm water beneath the ice to replace it from below.

Important too: The Larsen C calving and likely the near future break up of the entire Larsen C, follows the breakup of the entire Larsen B in 2002, a Rhode Island sized ice shelf disintegration that happening in 40 days. The way the Larsen B went, is that underice melt stressed and fractured the ice shelf. Then, what little surface melt that happened, accumulated in the fractured crevasses. Because water is more dense than ice, the accumulated water literally pushed the crevasses through all the way to the bottom of the ice and she completely disintegrated in 40 days. The Larsen A breakup in 1995 is an enigma. It literally vanished without a trace when we weren’t really looking. This was before we had the satellite coverage we have today. It probably disintegrated like A, but we just don’t know.

And another indisputable climate connection:  each of the Larsen’s shelves were (are) located a little farther south on the Antarctic Peninsula, “A” being the furthest north, “C” the furthest south. As global warming has increased, warmer conditions have progressed farther south incrementally, just like the warming. This has caused the ice shelves to collapse A, B, C, north to south.

There are still more reasons why this event was caused by climate change: Ice shelves around Antarctica are thinning, which increases iceberg discharge because the ice shelves are weaker, and thinning ice shelves have less confining force holding back the interior ice. These two things are responsible for the significant increase in ice loss from Antarctica from icebergs.

I’ve two posts on Antarctica in the last week on Climate Discovery–with pictures of this fresh water pump that is pulling warm water in under the ice, and a really cool “horizontal ice core” that tells us a lot. The reports don’t talk about the Larsen C, but about new discoveries about how ice shelves have behaved in the past and how this behavior relates to our present and future.

And some really important ice sheet collapse science–first ever modeling of new ice collapse physics–from a piece we reported on last December: