Why is the warming “pause” happening? Carbon dioxide emissions continue to skyrocket. Is it because of natural cycles or because climate scientists have a conspiracy agenda? Or are they simply wrong? 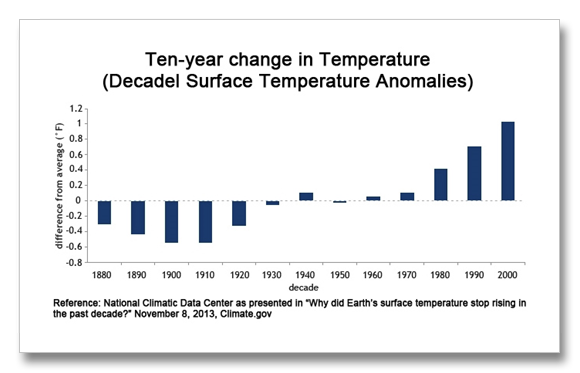 The temperature rise has slowed slightly when looking at the short-term, but only slightly. Deniers however say that since 1998 it hasn’t changed at all. This is not valid. We have set four new global all time annual high temperature records sine 1998 (2005, 2010, 2013 and 2014), but more importantly, 1998 was the year of the super El Nino.

Look here to see what our global temperature record would look like if the Super El Nino were removed. There is no pause.

Removing the “natural” cycle of El Nino radically changes the trend in global warming. This little 1998 illustration is exactly what this new research out of the University of Western Australia describes. It also elucidates one of the primary hacks of climate change deniers, I do not use this term in a socially acceptable way.

We are constantly reminded by the media echo chamber that some portion of climate change is not caused by mankind’s emissions climate pollutants. To most of us civilians, this means that Earth is warming without us. This could not be further from reality. Earth is supposed to be cooling and until about 50 years ago it was.

The new work published in the prestigious journal Nature evaluates global temperature normalized for the natural cycles of El Nino. What it finds is that when the Pacific Ocean temperature variation is removed from the equation—when the natural cycles of changing ocean currents and differing amounts of heat absorbed or released to the atmosphere in the “natural” cycles are considered—the models very accurately represented the global temperature trend.

One of the authors of this paper, Stephan Lewandowsky, is quoted in the press release form the University of Western Australia:

“Because projections have no information about the sequence and timing of internal climate variability, they average across the ups and downs of short-term trends in response to natural climate variations… One of the most important drivers of internal variability is the El Niño-La Niña oscillation, which determines how much heat is taken up by the oceans rather than the atmosphere… In order to meaningfully compare model projections against recent observed trends they must therefore be synchronized with natural variability.”

The press release says: “When the authors focused on those models that were synchronized with the El Niño-La Niña phase of the oceans, they found the models were in fact accurately estimating recent temperature trends and were even mirroring the spatial distribution of heat in the oceans.”

Stephan Lewandowsky is quoted again: “The results show that models selected in this way provide good estimates of 15-year trends over the past half century, including for the most recent 15 year period.”

The last 15 years has been very important for the Pacific Basin. NOAA’s Climate.gov tells us that la Ninas have dominated since 1998 cooling Earth and in addition, what’s known as the Pacific Decadel Oscillation has been negative or in the cool stage throughout this period as well.

The take-way here is that even when one of the biggest (if not the biggest) influence on Earth’s short-term temperature—the Pacific Ocean—has been cooler than normal, we have continued to set new all-time high global temperature records.