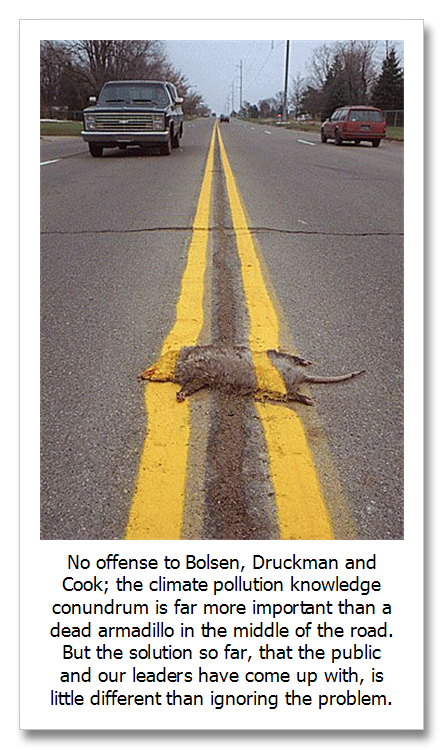 Bolsen, Druckman and Cook have summarized the emerging discipline of global warming psychology rather well with this paper. Scientists and policy makers are more likely to believe than the public and more likely to believe that warming is caused by man. There is political influence in what liberals and conservatives believe about the existence of and cause of warming, and counter intuitively the trio states: “Alarmingly, there is evidence that the ideological divide
about global warming gets significantly larger according
to respondents’ knowledge about politics, energy,
and science.”

Education efforts, when focused on non-believers, tend to reinforce  their views that climate change is either not real, is natural, is a conspiracy of scientists or is good for the planet. The reason for this fascinating but head scratching response is the great politicization of the perceived debate and is largely brought on by the propaganda of the $900 million annual funding umbrella of the climate change counter-movement (see here).

This backwards sounding reality is based on what is called false confidence. When an individual believes his or her knowledge is correct, unknowns cannot influence their thinking. It is basically the momentum of ignorance and is compounded by belief systems. Conservatives (in general) have less faith in science than others. When they are faced with science that is counter to their beliefs, it is difficult to get them to change those beliefs because of their preconceived notions of the validity of science.

These researchers emphasize that the climate pollution conundrum is not just one of scientific literacy; it is a challenge of ideologies and belief systems. Conservatives tend to support business and not the environment, so anything environmentally oriented attacks their belief systems. These beliefs are fundamental and have contributed greatly to a distrust of earth scientists, and again—significantly motivated by the $900 million annual funding umbrella of the climate change counter-movement.

The most important statement in this work is (in the eyes of (Climate Change Now); “Policy-makers rarely take action without
public support, and technologies that scientists believe are helpful will not survive
in the marketplace without being endorsed by policy advisors and the public.”

The paper ends with a poignant statement; “Future research must find
additional ways to counter the politicization of science if we hope to combat the
challenging and complex problems that we collectively face.”

$900 Million Annual Climate Change Counter-Movement…
From 2003 to 2010, $7 billion in climate change counter-movement funding has been identified from revenues reported in IRS tax returns for 91 of 118 organizations and institutions identified in the academic literature as being involved.
Brulle, Institutionalizing delay: foundation funding and the creation of U.S. climate change counter-movement organizations, Climatic Change, December 21, 2013.
http://www.drexel.edu/~/media/Files/now/pdfs/Institutionalizing%20Delay%20-%20Climatic%20Change.ashx