As the release of this massive consensus report nears, media sensationalists are at it again. They are dredging up long proven inaccuracies and waving them from atop their flagpoles using rumors from the report to base their reporting on. Their complicity with vested interests seems obvious, but a close evaluation of their efforts proves they are simply reporting vested interest propaganda as “the other side of the debate.” So below is a list of these “inaccuracies” that you need to remember. Tell your friends—the only way to overcome propaganda is with fact. 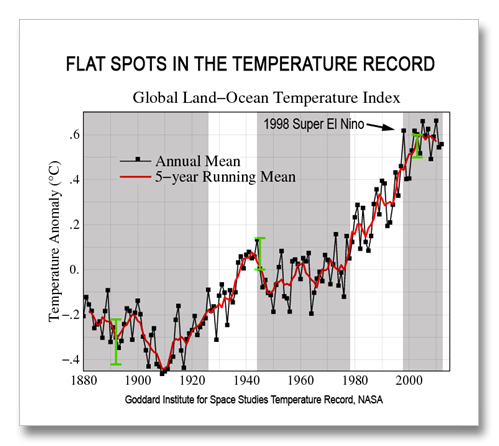 1) Temperature: Reporters say that the so-called stall in temperature increase will be the main point of contention. They say temperatures have not risen above 1998 levels since. Ask a climate scientists—never ask a reporter.  The Super El Nino in 1998 was by far the biggest ever measured and as a result the increase in global temperature that year was—by far—the biggest ever measured. A record of that magnitude is not easily broken. Yet, we have broken it 3 times since (2002, 2005 and 2010) and tied it once (2001).

2) “Reporters” will be using the temperature graphics given to them by those who tell us that climate change is a hoax. An example is this BBC graphic from today (http://www.bbc.co.uk/news/science-environment-24085062) This is a deception play by the vested interests on BBC. They have given those reporters (or somebody has) a graphic of the global temperature and represented its source as being from the UKMet Hadley office—Great Britain’s national weather service. It is not, it is  from the University of Alabama at Huntsville (UAH) temperature record and it is not even the most recent one. This one stops in 2008 to show the maximum amount of “stall”—beneficial to the interests of denial and delay. The UAH has long been used by deniers and delayers because it shows the least amount of warming. But this is only appearance. The biases in this temperature record have now been identified. (see here) 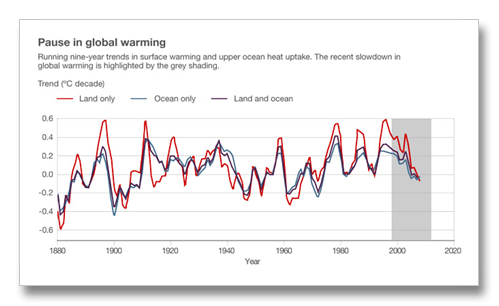 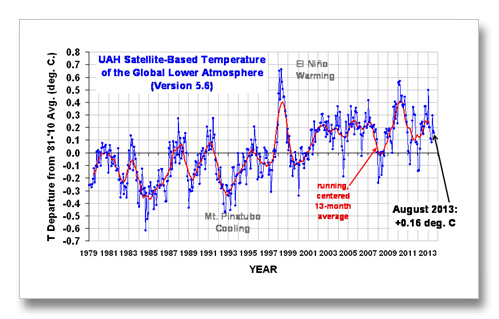 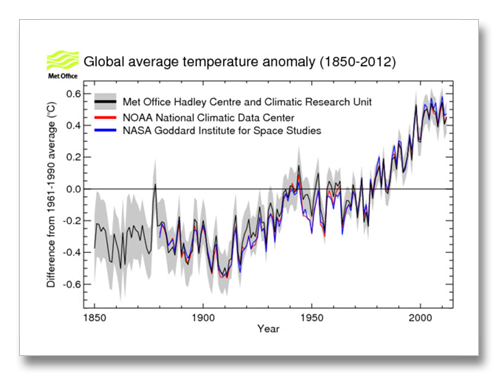 The Science: There has been a slight diminishment of the rate of temperature rise but CO2 emissions have only increased rapidly and the records continue to be set. You can see the increase yourself in the very top graphic (Goddard Institute for Space Studies—the main US climate agency) and the last graphic above from the UKMet.  Because CO2 emissions rates have only increased, warming should be even higher than it was during the 80s and 90s. But it is not, because things are masking the warming. What these “masks” are: 1) Aerosols emitted from burning dirty coal. Aerosols are cooling pollutants and dirty coal emits them by the trainload. They cool our atmosphere instead of warming it like greenhouse gases. (see here)  The increase in coal burning in the Far East has increased cooling pollutants across the globe. These are masking warming. 2) Winds have increased across the planet. This increases ocean currents and buries heat absorbed by the oceans faster and in deeper water as scientists have found to be occurring. (see here)

4) Sea level rise: The rumor here is that the IPCC will only slightly raise the level of their projected sea level rise. The last IPCC report, sea level rise was less than a meter in a century. But six times in the report, the IPCC stated that this amount of rise does not include catastrophic releases from Greenland or Antarctica. Their reasoning is that scientifically, these events are so rare and hard to substantially validate because of their chaotic nature, the science simply cannot predict their recurrence at this time. Prehistoric evidence tells us that the last time Earth’s temperature was as warm as it is today, sea level jumped 6 to 10 feet in a decade from a collapse of the West Antarctic Ice sheet. (see here and here)

Mother Jones had an article on a leaked/pirated draft of the new IPCC report on August 20. (here) The article tells us the message from the IPCC is profound and I am awaiting the real wording in the real report to verify the fundamental nature of the quote from MJ below:

Even if we were to completely cease all greenhouse gas emissions, the draft report adds, warming would continue for “many centuries.” “A large fraction of climate change,” the document intones, “is thus irreversible on a human time scale.” The only way out would be if our emission levels were “strongly negative for a sustained period”—which, to put it mildly, seems highly unlikely.

This statement “Strongly negative for a sustained period” tells us that we must remove more than 100 percent of annual emissions from out atmosphere every year. In other words, emissions reductions alone are no longer sufficient to save us from dangerous climate change. We must finally begin to start removing some of the climate pollution that we have been placing in our skies directly from the sky.

The full IPCC report will be released Monday September 30.