How to Help: Communicate Wisely

By Bruce Melton PE December 11, 2016 communications, Deniers and Delayers, Messaging, Myths, Psycho, Solutions, Strategy, What we can do 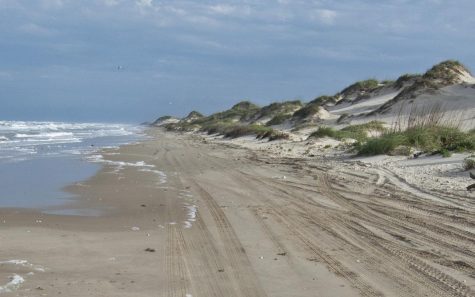 South Padre Island, Texas: Mile 14 beyond the end of the road. There is supposed to be a big wide beach here, but erosion due mostly to sea level rise has taken it from us. This is happening all across the world, but it is masked because very few people visit beaches that are not artificially nourished with sand pumped up from the depths. The reason that this sea level rise catastrophe is not recognized is that communicating these unbelievable things that have never happened before in our society is a very difficult thing to do.

What is the absolute best way to enhance awareness about climate change? It’s personal impacts. But if personal impacts mean we have already experienced irreversible climate change (in time frames that matter), what is the next best way to enhance awareness? Storytelling. This is how we have communicated knowledge since time began, and it is still (quite likely) the best way to communicate the most knowledge to the most folks.

A continuous string of never-ending stories has also been used since time began to influence people with both truths and untruths. It’s not the truth of a story that compels, it’s the number of times the story is told. Human psychology says that untruths can enter into our minds truthful, if they persist long enough and are repeated often enough. This creates an all too recognizable problem with climate science and many other societally critical subjects in our past and today. Racial issues of all types have been at the top of this list in history whether the race be black, brown, white, geographic, or political in nature. World War II comes to mind as one of the most important propaganda efforts ever.

More recently, some of the very same people who were involved with the smoking, acid rain and ozone depleting chemical debates are now working with the Climate Change Counter Movement to create a string of never-ending stories revolving around myths–founded in truth, but distorted to appeal to our natural human fears and paranoias.

The techniques all rely upon one simple strategy: that of presenting believable, logical, morally solid appearing stories that cast doubt on whatever subject it is that is in dispute. The phenomenon is fueled by myth, itself almost always founded in some fragment of fact. Take the warming hiatus debate for example. The super El Nino in 1998 created a huge spike in global temperature. When the Nino ended, the temperature fell back to just a little bit warmer than it had been in 1997. It then continued to warm slightly every year and it was not until 2005 that the record was broken again, and then by but just a little bit. Then again in 2010 and 2014, broken by just by a little bit. The result was that a myth grew, propagated by the CCCM and repeated endlessly in the media, that climate change was either not real or had ceased because the thermometer record quit warming.

Many things contributed to this myth, most of all the unfamiliarity of civilians with the industry of science. We now know that the rise of China post 2000 and construction of far more coal energy generation there than at any time during the societal development of any other geographic region of the world created so many global cooling sulfates that the global temperature rise was masked.

We now know that if it were not for this masking, the global temperature would be a third higher than it is right now creating a real world where more than all of the warming in the thermometer record has been caused by mankind’s emissions of greenhouse gases. In other words. the myth that part of the warming is natural and part is caused by man is just so, another myth–a really big one that even most climate scientists believe. What? Most climate scientists? Yes indeed. Scientists are specialists. The cryoseismologists really have not a clue what the marine biogeochemists, tempestologists, or attribution scientists are up to. So most scientists get their climate science knowledge from the media, surprise. Though they are a little more savvy than civilians and can disprove to themselves the greatest stretches of the truth, they are influenced in a very signficant degree by media reporting.

Fixing the Problem: Communicating to Beat the Propaganda

It’s not just us. We are not so gullible that we will accept anything that remotely sounds feasible. This is one of the big reasons that climate change has created such epic skepticism. Unbelievable things, no mater how real, are not easily believed. To fix the problem we have to create space in our brains that has a memory of reality as it truly exists. How do we do this when we have never experienced climate change before? How can this new reality, never before witnessed by mankind, become believable, in light of the challenges of human nature and the fantastic nudge given the psychology by the unbelievable CCCM funding of greater than $900 million annually?

The answer is incessant story telling. We have to go back to our roots to create enough information in each of our individual memories so that we become familiar with the topic. The greater the familiarity, the more easily it is to believe that these unbelievable climate things are true.

Denial is not just a river in Egypt. Cancer victims, abuse victims, victims of violence and racism (it’s a long list) have a tremendous problem with denial–and our society is flush with knowledge on these topics. The reason that denial exists is because of personal unfamiliarity with reality. Our brains are wired to ignore disbelievable things. But if we are continually knocked upside the head with them, their reality begins to become recognized. It’s persistence and repetition that count.

This process happens naturally as personal information is gained by an individual, but it takes time and this time is directly proportional to the need. Because a myth has evolved that says that climate change will be a problem at some point in the distant future, the immediate need of understanding (and action) is not clear–because the science is not clear.

The myth persists because impacts are hard to see. Even though impacts are generations and even a century ahead of schedule, they are located in extremely remote parts of the world or are associated with parts of our world that are only well understood by scientific specialists. The story revolves back to an understanding of science once again.

To hasten the awareness of reality that is so important to beginning to understand that we need to not only reduce emissions, but to actually remove the climate pollution from our sky so that we can return our climate to a healthy state, we ourselves have to generate the familiarity in our brains that is required so that we can see these unbelievable things that are coming out of academia as the believable things they truly are.

We have to communicate why it is that climate scientists are so much more distrusted than other scientists: We get almost all of our news about climate change from the media. The media have been broadly demonstrated–even the left leaning media–to understate climate impacts and present the vast minority of scientists equally to the rest.  In academia it is called the “Fairness Bias” (see references below) and is well described by University of California Santa Cruz and American University where the media, in trying to be fair–reports 3 percent of climate scientists views “equally” to 97 percent of climate scientists views.

Solution:  Talk about the fairness bias, the 97 percent reported equally to the 3 percent. Talk about how researchers say climate scientists do not trust the media’s delivery of their work (see references below). Directly implore writers, journalist, media spokespersons, and editors to present clips of anyone claiming that climate change is a hoax as unscientific; as blasphemous even. After all, our Earth is our temple.

Relative to The Weather: Climate change is the weather. People pay attention to it. The most important “sit down and shut up” message about the weather and climate change is that: Climate and weather models are basically both the same thing, only the way they are used as tools is very different. Weather modeling creates a specific forecast for a specific date and the forecast can vary radically from what actually occurs in just a few days. Climate modeling creates an average forecast for a period of time that is thousands of times longer than that of weather models (decades, centuries, and millenia vs. some day next week), and they do this by averaging together all of the chaotic “wrong” forecasts in scores and even hundreds or a thousand or more individual model runs.

Use Science Wisely: Use statistics–they work when used properly: Scientists at Columbia University have calculated that the 2011 drought in Texas and Oklahoma was made 10 to 100 times more likely because of warming we have already endured. Any statistics like this will do, but local is better.

Cite sources boldly and every time: example above — “scientists at Columbia University…” Authority is transmitted with citation. Authority is badly needed to overcome epic skepticism.

Another: The $900 million annually funded Climate Change Counter Movement (Drexel and Stanford University)–we all know what this is–has created a mistrust in climate scientists exactly as and through some of the exact same people as created mistrust in the science of the smoking debate, the acid rain debate, and the ozone depleting chemicals debate (Harvard). The strategy used by the Climate Change Counter movement to effect this mistrust, is repetitive propaganda through the media.

The WMO has done an exceedingly good summary of how choice of words is important. The play of words–how we talk about climate–can actually diminish trust in science as the CCCM has so profoundly demonstrated. Example — using scientific lingo in discussion, including “uncertainty”, “confidence”, “error bars” and etc., these things need to be translated into plain English as they mean very different things to scientists than they do to civilians. Listed below are the seven items of importance from the World Meteorological Organization:

Climate Science Education has failed, the “Fairness Bias” and climate scientists don’t trust the media… “Through content analysis of US prestige press— meaning the New York Times, the Washington Post, the Los Angeles Times, and the Wall Street Journal—this paper focuses on the norm of balanced reporting, and shows that the prestige press’s adherence to balance actually leads to biased coverage of both anthropogenic contributions to global warming and resultant action.”